(SEOUL=Yonhap News) China has emerged as South Korea's No. 1 trading partner after their diplomatic relations were normalized in 1992 with their bilateral trade volume skyrocketing over 33 times in the past 25 years, industry data showed Friday.

South Korea posted trade surpluses for most of the cited period. Its trade surplus reached $37.5 billion last year, accounting for 42 percent of the country's overall trade surplus worth $89.2 billion.

Over the past years, the portfolio of exported items to China also has changed. Steel plates, synthetic resins and reinforced bars were three major products shipped to China in 1992.

Demand for South Korean vehicles and cosmetics products also climbed in China during the mentioned period.

Vehicle exports marked $83 million last year, up from $13 million in 1992. The figure did not include those produced in China. But last year's figure was a 91 percent drop from $940 million in 2015 due to lower demand for Korean cars amid diplomatic rows over the deployment of a U.S. missile defense system in South Korea. Cosmetics shipments reached $1.6 billion last year though the corresponding data for 1992 do not exist. 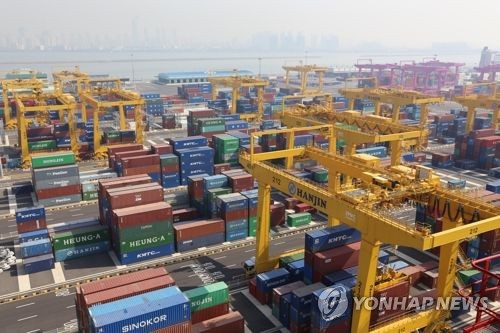 In this undated photo, containers are piled up at a port in Incheon, 40 kilometers west of Seoul, before being loaded onto ships. (Yonhap)

Moreover, the diplomatic ties has spurred more Chinese people to visit the neighbor in the recent years. The number of Chinese people who visited South Korea reached 8.07 million last year, a whopping increase from 86,865 in 1992. The number was much higher than 2.3 million by Japan and 870,000 by the U.S., the FKI said in a statement.

In the January-June period, however, the number of Chinese visitors plunged 43 percent to 2.2 million from 3.86 million a year earlier amid a spat over the deployment of the U.S. Terminal High Altitude Area Defense (THAAD) system here, showed data from the business lobby.

Beijing has opposed the deployment, arguing the system could be used against it though Seoul has said it is purely aimed at countering missile threats from North Korea.

However, such a dramatic development in their economic ties have spawned concerns that South Korea is too dependent on China for its outbound shipments.

China was the biggest buyer of Korean products last year, accounting for 25 percent of Korean exports compared with 11 percent in 2000. In contrast, the comparable portion for Beijing's exports to Seoul remained little changed at 4.5 percent of its overall shipments during the same period, said the Ministry of Trade, Industry and Energy.

That means any bilateral tussle, as was seen over the THAAD deployment, can put the two's bilateral economic ties at risk with Korean companies operating in China having no option but to suffer steep declines in their sales.

In recent months, major Korean manufacturers performed poorly in China due to travel bans to South Korea and boycotts against Korean products amid the THAAD row.

Top carmaker Hyundai Motor Co. posted a 48 percent on-year decline in second-quarter net profit to 914 billion won. Lotte Shopping Co., the operator of the Lotte Department Store, suffered the most, with its net profit slumping 95 percent to 4.1 billion won in the second quarter.

Experts say the companies badly need to diversify their export items to China and look to other markets to offset sales declines in the neighboring country.