According to North Chungcheong on August 21, a delegation from the province including Governor Lee Si-jong held an information session in Taiwan from August 18 to 20 to attract investment and medical tourists.

During their visit, representatives of the local government signed with the Taiwan External Trade Development Council (TAITRA) to promote investment and trade between the two countries.

Governor Lee met with Mayor Ko Wen-je of Taipei as well as with Wang Jin-pyng, member of the Legislative Yuan, and discussed opening a regular flight routes between Cheongju International Airport and Taipei.

At the meetings, Mayor Lee emphasized the need to regularize the flight routes between Taiwan and the province to accommodate the increasing number of Taiwanese tourists to Korea, and succeeded in receiving positive responses from Taiwanese representatives to offer their full support.

Mayor Lee also met with Vice President Stephan Fox of SportAccord at the opening ceremony for the Taipei Summer Universiade, and asked for his active support in bringing the 2019 World Martial Arts Masterships to success. 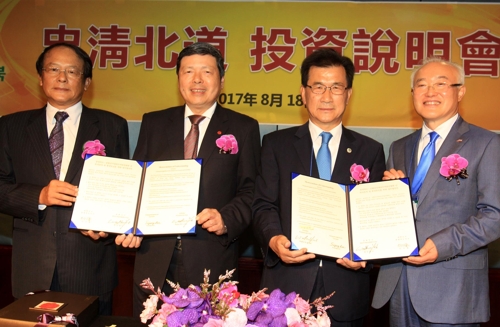