(SUWON=Yonhap News) Gyeonggi Province has succeeded in attracting investment from a Chinese company even as tension continues between Korea and China surrounding the deployment of the Terminal High Altitude Area Defense (THAAD) system.

Based on the agreement, Chinese investment firm Boyan and Korean company Cotem will each invest KRW 25 billion and 5 billion, respectively, in the province to build semiconductor-related chemicals production facilities in the Dangdong Industrial Complex in Paju, by August 2018.

Products made at the two companies' new facilities, where some 50 persons are expected to be employed, will be exported to China.

Cotem, in particular, expects the agreement to boost its exports to China for the next three years by KRW 50 billion.

The province and Cotem had made numerous attempts to attract Boyan's investment, including making the first offer to provide the company with land for new facilities, but tensions between the two companies following the THAAD deployment decision has led the Chinese government to forbid local companies from investing in Korea.

However, Gyeonggi Province and Yixing City continued to make contact, including Yixing mayor's visit to the province last January, and the city finally won the approval of the Chinese government, which resulted in the signing of the agreement.

At the signing, Governor Nam noted that he was "deeply moved by Yixing's efforts to invest in the province despite the difficult situation between the two countries," and added, "the agreement is highly meaningful as August 24 will mark the 25th anniversary of building diplomatic ties."

According to a provincial government source, "this is the first time China's central government has allowed a local company to invest in Gyeonggi Province. It is highly meaningful that the two local governments worked together amid tensions surrounding the THAAD deployment." 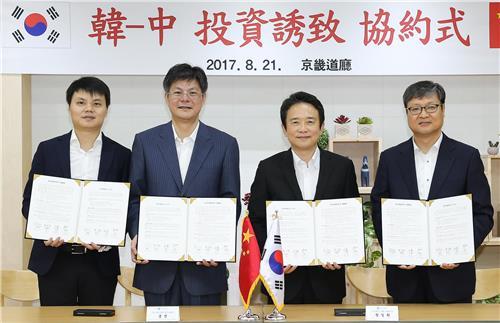