(SEOUL=Yonhap News) South Korea's exports to Vietnam surged nearly 50 percent in the first seven months of 2017, customs data showed Wednesday, an increase that is likely to put the Southeast Asian country among the top three shipment destinations for locally made goods.

According to Korea Customs Service, exports to Vietnam for the January-July period totaled US$26.95 billion, up a sharp 49.8 percent from the same period a year ago and roughly three-times higher than the 16.3 percent increase for South Korean exports as a whole.

The total amount is third-highest after $79.25 billion for China and $39.66 billion for the United States.

Shipments to Vietnam have been advancing by double digits every year since 2010 except for 2014, mainly due to South Korean firms moving their production facilities to the country, according to customs officials.

"Cases where South Korea exports raw and intermediate materials to Vietnam and imports finished goods are increasing," an official said.

Growing industrial demands in Vietnam and the implementation of a free trade agreement between the two countries also helped to push South Korea's exports to the country, officials said.

Vietnam has been steadily climbing up the ladder of South Korea's export destinations, up from 21st in 2000 to 13th in 2007 and to fourth in 2015. It presently replaced Hong Kong this year to make the top three.

Japan, which had been one of the top three until the early 2010s along with China and the U.S., fell to sixth place as of July. Exports to the neighboring country are increasing, but much slower than for Vietnam, Hong Kong and Australia, the latest tally showed.' 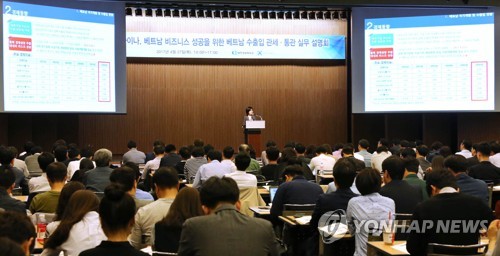 A customs agent gives a lecture to local businessmen in Seoul on April 27, 2017, on trading with Vietnam. (Yonhap)