Speaking at the opening of the 2017 Asia Cruise Forum Jeju on the southern resort island, the policymaker said the government will be more proactive in supporting the cruise industry that has been overshadowed by diplomatic tension with China. Chinese travelers who used to make up the bulk of cruise visitors have stopped coming to South Korea as Beijing enforced punitive measures from May this year against Seoul's decision to host a U.S. missile defense system.

"In light of the difficulties from such developments, it's time for us to look again at our policies and prepare for the future so that the industry can develop more strongly," Kim said.

According to the Ministry of Oceans and Fisheries, foreign visitors arriving on cruise ships reached 1.95 million last year, which had an economic effect of over 5 trillion won (US$4.43 billion) and created some 20,000 jobs here. Cruise travelers around the world surpassed 24 million last year, the ministry said.

Kim said the government will look to travelers from Southeast Asia, who have already been increasing in number, for future business. Two 100,000-ton cruise ships from Taiwan made a port call in the southeastern city of Busan last month, and two more port calls are scheduled in September, the minister said.

South Korea will join the Asia Cruise Cooperation within this year to diversify the cruise market, which will help attract tourists from Southeast Asian countries such as Taiwan, the Philippines and Hong Kong, Kim said.

The government will double the number of cruise-accommodating ports to 16 by 2020 and increase the number of passenger terminals to seven from current four, the minister said. Immigration procedures and visa-free entries will be improved to tackle both hardware and software aspects of the local cruise industry, he said. 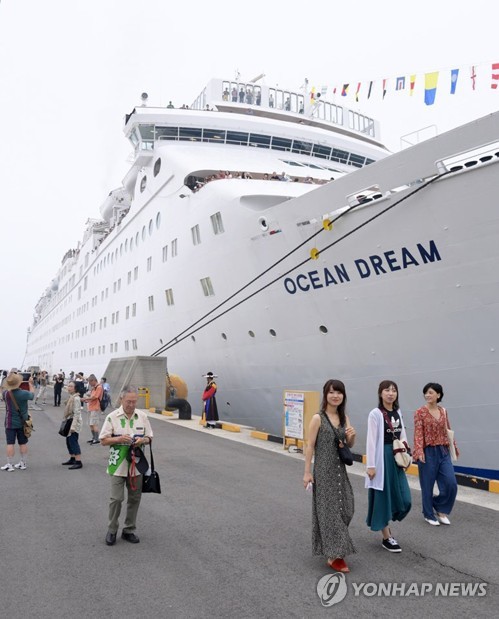