(SEOUL=Yonhap News) Global furniture giant IKEA said Tuesday it will open its second store in South Korea in October, as it aims to tap deeper into the country's home furnishing industry.

The new outlet in Goyang in the northwestern outskirts of Seoul -- a four-story building with three underground floors -- will open on Oct. 19, according to the company.

During the 2017 fiscal year, its first Korean store in Gwangmyeong, southwest of Seoul, recorded 365 billion won (US$323.9 million) in sales, up 6 percent on-year.

A total of 6.49 million visitors came to the store during the period, with the accumulated number of people who signed up for its membership exceeding the 1.2 million mark, it said. There are currently 1,610 employees working at the store.

"This is by far the biggest IKEA store in the world," said Andre Schmidtgall, the chief retail manager of the Korean unit, during a press conference held in Seoul.

With the new outlet set to open later this year, the furnishing company aims to target South Koreans' living rooms under the theme of "Express yourself, My living room, My way."

"IKEA Korea's market insights show that, while the living room is the most preferred space for many Koreans where the most amount of time is spent, many living rooms look similar and are without individuality due to a lack of experience, time and limitations of cost or space," it said.

To celebrate the opening of the new outlet, IKEA Korea will run a pop-up store equipped with four showrooms in Seoul from Aug. 30 to Sept. 17.

IKEA Korea plans to run six stores and e-commerce in South Korea with more than 4,000 co-workers by 2020, it said. 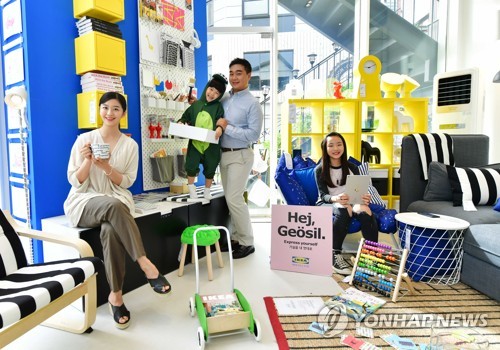