Production in the mining, manufacturing, gas and electricity industries climbed 1.9 percent on-month in July, turning around from a 0.5 percent on-month drop in the previous month, according to the data by Statistics Korea.

It also marked the fastest on-month gain since January when it posted a 2.8 percent rise.

From a year earlier, output also edged up 0.1 percent last month on the back of machinery and electronic parts output, which was offset by sluggish semiconductors and transportation equipment production.

Production in the service sector added 0.6 percent last month from a month earlier, with a 2.2 percent on-year rise.

Retail sales inched up 0.2 percent on-month and advanced 3.5 percent from a year earlier.

For all industries, output rose 1.2 percent in July from a month earlier to stay in positive terrain for the first time in four months, while it increased 1.5 percent from a year earlier, the data showed.

Production of cars rose 6.5 percent on-month and that of electronic parts including flat screens and other components jumped 9.4 percent.

The local oil refiners also made a turnaround to rise 9.7 percent in July after a 7.4-percent on-month contraction as they underwent temporary production halts for maintenance in June.

Meanwhile, retail sales remained upbeat for two months in a row in July on brisk sales of wireless devices and computers.

The statistics agency said private consumption seems to be in a recovery cycle as the seasonally adjusted retail index hit a record 122.7 last month.

"But in the coming months, there are some downside pressures," said Eo Woon-sun, director of the short-term industrial statistics division at Statistics Korea. "The escalating North Korean issues, which already dragged down the stock market, will likely dampen consumer and producer sentiment." 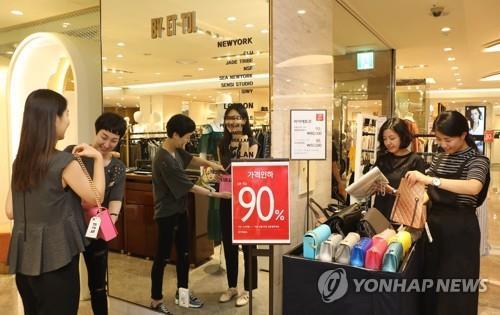