Outbound shipments came to US$47.1 billion in the month, up from $40.1 billion tallied a year earlier, according to data compiled by the Ministry of Trade, Industry and Energy, and the Korea Customs Service.

The country's exports have been on a steady rise since November led by an upturn in oil prices and recovering global trade. August marked the eighth month in a row that exports grew by double digits.

The country's trade surplus came to $7 billion, marking 67 straight months that the country's exports have exceeded imports, the ministry said.

"The upbeat pace in exports will likely continue for a while as the U.S., European and Chinese economies are growing," Deputy Trade Minister Kim Young-sam said in a briefing. "But there are still some possible downside pressures like a slowdown in the rise of oil prices, U.S. monetary tightening and strengthening of trade protectionism."

The trade ministry said the pace of outbound shipments of semiconductors has played a major part in spearheading the upside cycle.

Exports of chips surged 56.8 percent on-year in August to a record $8.76 billion, on the back of steady price hikes and the release of new smartphones such as the Galaxy Note 8 by Samsung Electronics Co.

Overseas sales of flat screens were on a roll and jumped 10.6 percent on-month to a two-year high of $2.56 billion last month on stellar sales of organic light-emitting diode (OLED) panels, and those of vehicles vaulted 23.6 percent on demand from Europe.

Outbound shipments of petrochemicals increased 18.8 percent on an uptick in oil prices and those of steel products leaped 13.8 percent thanks to an eased global oversupply.

Shipments of South Korea-made vessels slid 25.8 percent last month, and those of auto parts edged down 0.04 percent due to contracted demand from big markets like the United States and China.

By region, South Korea's shipments to China, the largest export market, gained 15.6 percent last month from a year earlier on steady demand for mobile chips and petrochemical products to mark 10 straight months of rise, while those to Vietnam jumped 36.9 percent, expanding for the 19th month in a row.

Exports to Japan landed in positive terrain for the 10th consecutive month to post a 5.5-percent on-year increase in August led by a rise in shipments of machinery and steel products in the run-up to the 2020 Tokyo Olympics.

The European Union's imports from South Korea shot up 165.9 percent last month from a year earlier on the back of clear signs of economic recovery in the region.

Shipments to the United States rose 23.2 percent on-year in August for second month in a row, on a sharp increase in exports of ships and machinery. A trade surplus with the world's largest economy climbed to $1.51 billion last month.

The trade ministry said South Korea's surplus with the U.S. has been on a steady decline since last year as the cumulative excess in goods trade decreased 31.5 percent in the first eight months of the year. South Korea's trade surplus hit $27 billion last year.

The massive surplus has taken fire by U.S. President Donald Trump who called the Seoul-Washington free trade agreement a "job destroyer" and demand renegotiations to amend the terms. 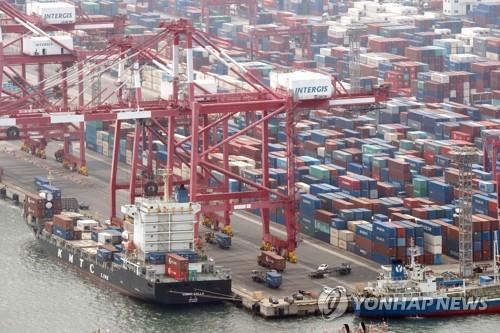