(GWANGJU=Yonhap News) The 2017 Asia Content & Entertainment (ACE) Fair in Gwangju, the largest cultural content market and comprehensive exhibition in Korea, is set to kick off on September 21 for a 4-day run at the Kimdaejung Convention Center.

The city of Gwangju announced August 31 that this year's ACE Fair will be the largest ever in variety of exhibition items, and number of participating companies and buyers.

Some 440 companies will be setting up 700 booths, including 200 booths by foreign companies from some 40 countries, and the number of participating buyers is expected to reach 400.

Even amid tensions between Korea and China surrounding the THAAD missile defense system, influential foreign companies will be participating at the event, including big Chinese buyers such as China's biggest video-streaming company Youku Tudou, the city explained.

This year's fair will be held at the same time as the Gwangju Design Biennale, which will take place at different venues in the city including the Gwangju Biennale Exhibition Hall and the Asia Culture Center (ACC), allowing visitors to also enjoy a wide variety of cultural content during their stay.

In the fields of broadcasting and video, three Korean terrestrial and cable networks and CJ E&M will participate, promoting new programs to overseas buyers, while a separate virtual reality (VR) center will be run by SK Telecom and a large number of VR content production companies.

In addition to the market and exhibition, a job fair and the World Web Content Festival, held at ACC until last year, will be incorporated under the ACE Fair title, making it the largest event of its kind, and raising expectations for greater synergy between the different fields.

The job fair will provide young local talent with information on the qualities companies seek in their workforce, as well as on company types, employment and startup skills, and the latest trends in the industry.

A Gwangju city government source said, "this year's event combines three events in one setting, and is ready to welcome visitors in its new, upgraded form," adding the city "hopes a large number of people visit the fair and experience all it has to offer." 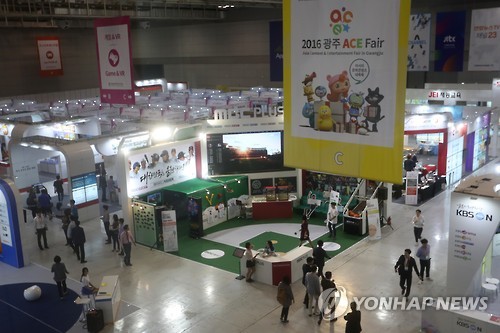