Korean cosmetics brands shift focus from China to the U.S.
Date
2017.09.04
Views
935
According to Pulse by Maeil Business News Korea,

South Korean beauty brands are shifting their attention to the United States after their presence in China took a toll from Seoul’s deployment of a U.S. antimissile shield that led to consumer shunning of Korean brands.

For Korean cosmetics companies, the U.S. is the third largest overseas market after China and Hong Kong. Korean brands have been making headway in the global beauty market, once dominated by American and European labels, on the back of novel ingredients and affordable products that don’t skimp on quality.

The shift in market focus comes as Korean firms have been hard hit by a Chinese backlash over Seoul’s decision to deploy a U.S. missile system to counter threats from North Korea. China has vehemently opposed the system, saying it poses a national security risk.

Korea’s top cosmetics firm AmorePacific Corp. is among the many companies making an aggressive push into the U.S. market. It set up its first local entity in Los Angeles in 1986 and has since introduced its luxury brands AmorePacific and Sulwhasoo as well as the French perfume brand Annick Goutal, which it acquired in 2011.

The cosmetics giant is preparing to launch a flagship store for its brand Innisfree in Manhattan’s Union Square in September. Innisfree’s focus on natural, organic sources and its affordable price range are expected to make it a success among ingredient-conscious Americans, according to AmorePacific.

The slightly pricier brand Laneige, which used to be sold in the U.S. retail chain Target, is in plans to enter Sephora cosmetics outlets across the country by the end of the year. Laneige made its first appearance on Sephora’s online mall where it introduced 48 products in June. In just a month, it ranked ninth in sales among skincare brands, with its sleeping mask topping the list on the second week of July.

LG Household & Health Care is also enjoying the success of its herbal cosmetics brand Belif, which was the company’s first label to be launched in the U.S. in 2015. The brand first featured in 35 Sephora shops and has now expanded to 180 stores as of the second quarter this year. Monthly sales of its bestseller item, the True Cream Aqua Bomb, average 20,000 units across the country. It ranked among the top sellers in the moisturizer category of Sephora’s online mall just six months after its release. 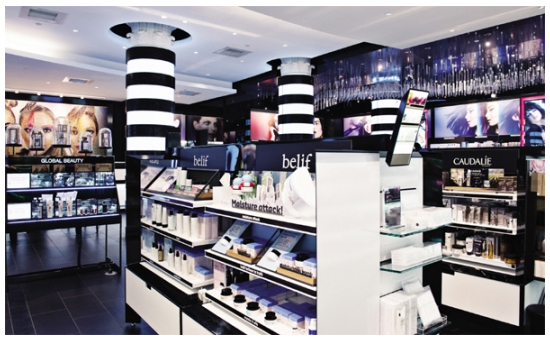