“Korean exports have grown by double digits throughout this year and at this pace, $1 trillion trade volume would be achievable by the year-end,” Minister of Trade, Industry and Energy Paik Un-gyu said at a trade conference held Tuesday.

Korea’s annual trade first hit the $1 trillion mark in 2011 and maintained this volume for four consecutive years. But it slumped to $900 billion in 2015 and 2016 in the wake of the global recession. Trade has picked up again this year on the back of strong semiconductor and petrochemical exports, reaching $600.8 billion in the January-July period. At this rate, Korea is well positioned to close the year with a trade volume of $1.03 trillion.

Kim In-ho, chairman of Korea International Trade Association, also forecast that Korea could set a new milestone this year to become one of the world’s five largest exporters. In terms of outbound shipment, the country ranked eighth in 2016 and sixth in the first half of this year, behind China, the U.S., Germany, Japan and the Netherlands.

Paik underlined the trade ministry’s efforts to expand exports and improve trade conditions. The government is working to improve the business climate to boost investment at home and create more jobs, he stressed.

The ministry is planning a fundamental overhaul in policy financing and investment promotion to encourage more companies to return home and build facilities evenly across the country, Paik said.

The government envisions boosting the share of exports by small and medium-sized enterprises (SMEs) to 40 percent from current 37.6 percent by 2022. It aims to promote 25,000 locally-focused firms to venture overseas. At the same time, the government will increase trade guarantees for SMEs to 65 trillion won ($57.5 billion) by 2022 from 44 trillion won last year.

More policy focus would be given to new industries and the services sector so that service-related exports move up to the world’s 10th largest from last year’s 17th rank. 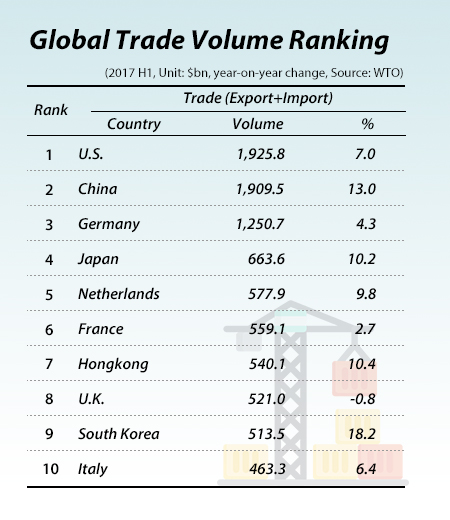