The Korea International Trade Association (KITA) has partnered with CJ Powercast, the digital content affiliate of CJ Group, to build the WTC Seoul K-POP Square project in December, KITA said in a statement, adding construction will start and be completed in the same month.

WTC Seoul stands for World Trade Center Seoul. The KITA building is located in Samseong-dong in the southern part of the capital city.

In the K-POP Square, there will be a giant high-definition, light-emitting diode bulletin board that is the size of four basketball courts and a 5,000-square-meter open stage for K-POP related performances and events, the trade association said. 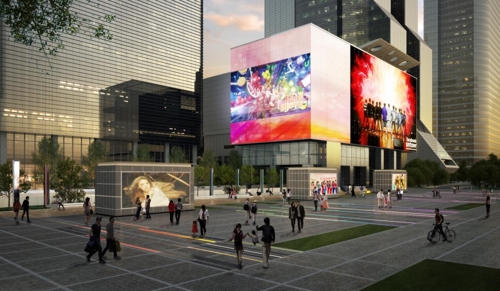 This image, provided by the Korea International Trade Association, shows the WTC Seoul K-POP Square to be built in southern Seoul in December. (Yonhap)