GM Korea CEO reaffirms not to exit from Korea, but focus on building the operation
Date
2017.09.07
Views
1138
According to Pulse by Maeil Business News Korea,

The new chief of General Motors Co. (GM) stressed on the pivotal role of GM Korea in the American carmaker’s global network and operation to quench speculation about the company pulling out of the Korean market.

“I have heard the many rumors of media regarding our operation in GM Korea,” Kaher Kazem, CEO of GM Korea, said at a media conference held at the GM Design Center in Incheon on Wednesday.

“Our team and I are committed to turning around our Korean operations, working with all stakeholders and our partners to improve our competitiveness and profitability.”

This is the second time the former chief executive of GM India who led the massive restructuring of GM’s Indian unit to verbally appease the concerns of the employees of GM Korea, previously Daewoo Motor.

“GM Globally is in the right markets to drive profitability, business performance and capitalize on growth opportunities for the long-term and this includes Korea,” he said.

The Korean operation is not only GM’s fifth largest Chevrolet manufacturing site but also plays an “important role as a manufacturing, design and engineering base for GM Global,” he added.

It is also home to GM’s second-largest design facility, responsible for designs for mini, compact, SUV models like Spark, Aveo and Trax as well as Bolt EV, he said.

At the media event on Wednesday, GM Korea unveiled part of its design programs applying the three-dimensional augmented reality technology. Researchers wearing a head-mounted display opened the Bolt VE’s door to sit in the seat, charged the battery and changed the color in the virtual reality.

“Through the virtual reality, we can have more vivid images of the car we’re developing,” said Park Ji-hun, a team head of GM Korea. He expected the new gear would further boost the company’s design capability. 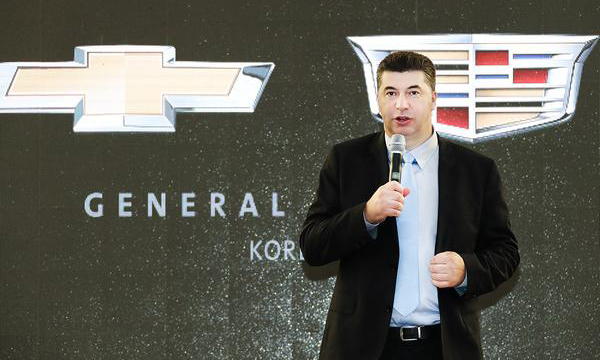