The car-sharing industry in South Korea is growing rapidly as more consumers seek the on-demand service for convenience amid increased use of mobile technology. The number of subscribers for existing app-based car-sharing service providers such as Socar and GreenCar is increasing significantly and large companies including SK Holdings and Hyundai Capital Services Inc. are putting out efforts to expand its industry presence. Korea’s largest automaker Hyundai Motor Co. has also jumped on the bandwagon by launching its own car-sharing program as it seeks to diversify its revenue source.

Socar, the country’s largest car-sharing service provider, said on Thursday that the number of subscribers has reached over 3 million, marking a milestone in five years since its launch in 2012.

An unnamed official from Socar said that the figure signifies that one out of every 10 Koreans with a driving license is a Socar user.

Its industry rival GreenCar is trailing closely behind with 2.35 million subscribers.

Amid the upward trend in the country’s car-sharing industry, large conglomerate-owned companies are joining to expand their business in the growing sector.

SK Holdings Co. said on Thursday that it invested in shares of Turo, the largest peer-to-peer car-sharing startup in the United States. The investment was jointly led by German car giant Daimler AG - the owner of Mercedes Benz - in a 100 billion won ($88.5 million) funding recently raised by Turo to expand business.

Automakers are also putting out efforts to ride on the bourgeoning car-sharing business in Korea.

Automakers’ move comes amid concerns that the growing popularity of car-sharing service could lead to a drop in overall car ownership and as a result a decline in car sales.

RethinkX, a U.S.-based independent think tank, projected that sales of new cars in the U.S. will drop from 18 million units in 2020 to 5.6 million in 2030 due to the widespread of self-driving and shared vehicles. 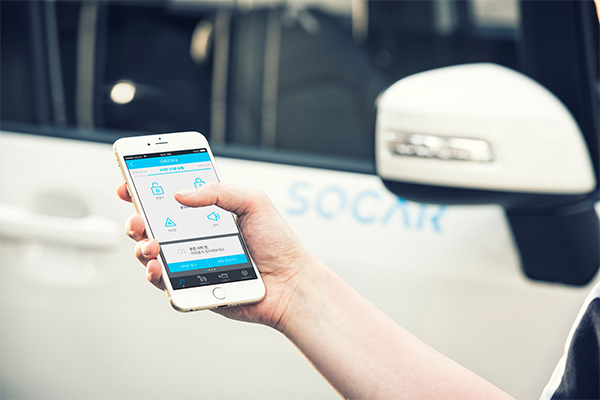 By Kim Jung-hwan and Park Chang-young