The South Korean government and the petrochemical industry have launched a project to upgrade an industrial complex in Daesan, Chungnam Province, fostering it as the country’s leading industrial cluster dedicated to advanced petrochemical technology.

The complex, 130 kilometers southwest of Seoul, is home to many Korean petrochemical giants, including Lotte Chemical and Hanwha Total.

On Thursday, Huh Soo-young, chairman of the Korea Petrochemical Industry Association and CEO of Lotte Chemical, Othman Al-Ghamdi, CEO of S-Oil and Kim Hee-chul, CEO of Hanwha Total signed a memorandum of understanding with representatives from the provincial government and the city of Seosan, where the Daesan complex is located, to cooperate on developing the infrastructure.

Some companies have been unable to expand their facilities due to various issues like land shortage and water and electricity problems. The central and local governments agreed early this year to further develop the complex by expanding desalinization and power generation facilities. 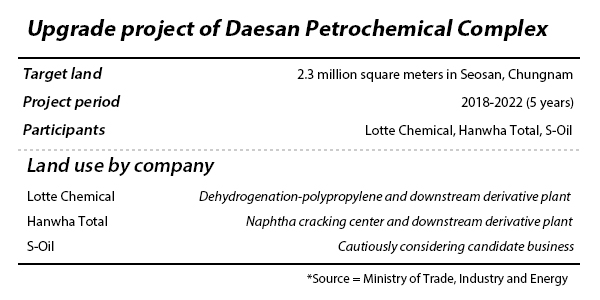 S-Oil is also able to add on new business lines such as high-value added chemical products and LNG power plant as its extra land of 1.14 million square meters near the complex was included in the development project. S-Oil may start its new business for LNG power generation in the complex, bringing competition to the local market led by SK E&S, GS EPS and Posco Energy, according to market watchers.

Hanwha Total said it plans to introduce a smart manufacturing system in its Daesan plant by investing 30 billion won until 2019.

The government will maintain the industrial complex as one led by the private sector to ensure speedy project development. 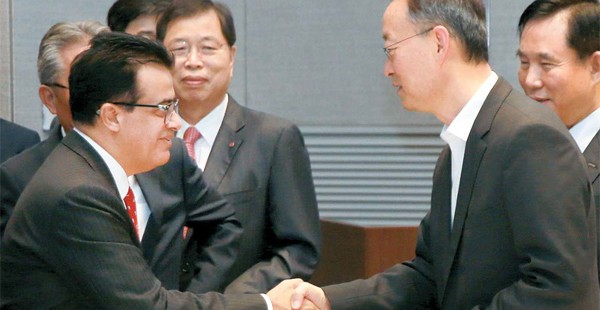 In this photo provided by the trade ministry, South Korea`s Minister of Trade, Industry and Energy Paik Un-gyu (second from right) shakes hands with Othman Al-Ghamdi, CEO of S-Oil, during a breakfast meeting with petrochemical industry leaders in Seoul on Sept. 14, 2017. The meeting was also attended by Huh Soo-young, chairman of the Korea Petrochemical Industry Association and CEO of Lotte Chemical (right), Park Jin-soo, LG Chem vice chairman and CEO (third from right), and other petrochemical industry leaders.