(SEOUL=Yonhap News) Major South Korean manufacturers of semiconductors and displays plan to invest a combined 51.9 trillion won (US$45.8 billion) in the domestic market by 2024 to help stimulate the local economy and create jobs, the government said Monday.

Senior executives from major manufacturers announced their investment plans during a meeting with Minister of Trade, Industry and Energy Paik Woon-gyu, in which they outlined strategies to further develop the high tech industry, the ministry said. 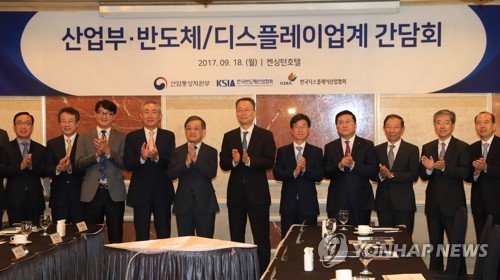 Paik Un-gyu, the chief of the Ministry of Trade, Industry and Energy, (C), attends a meeting in Seoul on Sept. 18, 2017 with senior executives of South Korea's leading chipmakers and display manufacturers, to discuss ways to further develop the industry sector. (Yonhap)

During the meeting, Paik vowed to expand support for the semiconductor and display sector, one of South Korea's main export drivers and the core sectors of the next generation technology revolution, his office said.

South Korean chipmakers have benefited from increased overseas demand and higher prices this year, with outbound shipments of computer chips surging 52 percent on-year to $50.5 billion in the first eight months of this year, according to the Korea International Trade Association.