(NAMYANGJU=Yonhap News) An international festival for healthy eating and an eco-friendly lifestyle is slated to begin in a city east of Seoul later this week, organizers said Tuesday.

Under the theme "Food, City and Health," the Namyangju Slow Life International Festival will be held in Namyangju for five days starting Friday, bringing together participants from around 40 countries.

The slow lifestyle is aimed at improving the quality of life by adopting traditional methods of eating and living, which will eventually lead to the three spirits of the event -- health, environment and empathy.

Organizers said the three core spirits are based on a philosophy advocated by Jeong Yak-yong, a scholar from the Joseon Dynasty (1392-1910). His philosophy is aimed at improving the environment, economic value and the social status of rural regions.

Under the slogan of "Slow Life into Living," the annual festival will feature a range of exhibitions, performances, forums, and opportunities to taste foreign foods and drinks. 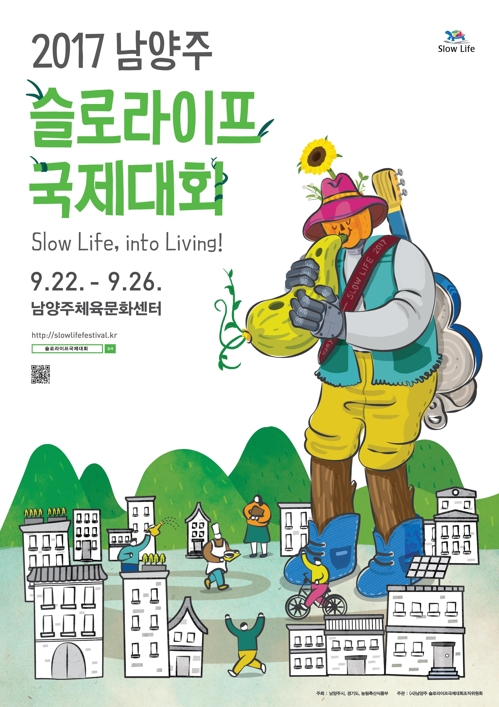 Visitors can experience a slow urban life model at a "grocery restaurant" and other venues, and can sample various dishes and drinks from countries around the globe, including Germany, Egypt, Peru, Spain and Vietnam.

Wives of 10 foreign ambassadors stationed in South Korea will introduce dishes and the food cultures of their countries during the five-day period, while a national cooking competition is slated to be held.

With the festival to kick off about a week before the start of the Chuseok holiday, eco-friendly livestock products, grains, fruits and traditional foods are available for sale during the festival. Chuseok, one of the biggest traditional holidays here, falls on Oct. 4 this year.