"A big part of air pollution over the skies of this city (Seoul) is driven from and a result of carbon emissions from automobiles. We can take cars off the road by reducing the number of single occupancy vehicles," he said, adding that such a development will help solve air pollution issues. 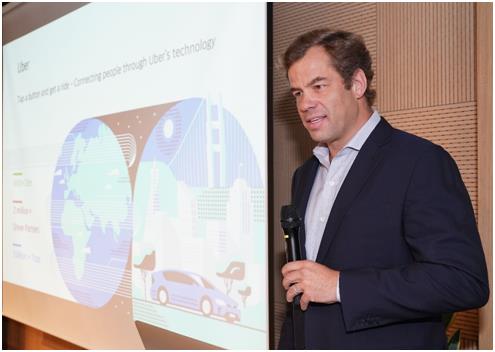 Prior to the uberSHARE service's official launch, Uber signed a memorandum of understanding with the Korea Green Foundation last month to work on the issue together, the Singapore-based executive said.

"There are three million cars on the roads in Seoul. The number has increased by 10 percent over the past decade. That is an extraordinary number causing congestion and taking longer time to go to work," he said.

The uberSHARE service is initially available for carpool commute trips that start from the affluent Gangnam Ward in southern Seoul. The service is available Monday through Friday (excluding weekends and public holiday) from 6 a.m.-10 a.m. and 5 p.m.-midnight, Uber said.

Partner drivers are allowed to serve fellow commuters only two times a day and the service fares appear to be reasonable.

Uber has advanced to more than 600 cities in 77 countries with its ride-sharing services. But the uberSHARE service is only available in Seoul for now.

In early 2015, Uber entered the Korean market with its UberX car-sharing service but it was banned in Seoul as it violated local transportation laws by partnering with nonlicensed independent drivers.

While looking for an opportunity to resume the UberX business in Seoul, Uber launched its premium taxi service, UberBLACK, last year mainly to serve customers in the downtown, Itaewon and Gangnam areas.

"We (will) continue our dialogue with the city of Seoul in a constructive manner," the executive said.