"The first challenge the world economy is facing is the emergence of self-centered policy and protectionist trade and the resulting slowdown in trade," Lee said in a welcoming address at an economic ministers' meeting of the Asia-Europe Meeting (ASEM) forum.

The seventh ASEM economic ministers' meeting opened Thursday at the Convention and Exhibition Center in southern Seoul with economic ministers and senior officials from 51 nations in attendance. It is the first ministerial meeting to take place in 12 years.

"This is in line with the economic policy paradigm of the new South Korean government," he said.

Lee also called for support for Seoul's push to resolve the North Korean nuclear issue, saying Pyongyang's nuclear weapons development poses threats to the security of not only South Korea, but also Northeast Asia and the world.

Lee recalled that ASEM produced declarations on peace on the Korean Peninsula at its 2000 and 2002 summits.

"I anticipate ASEM's leadership for peace on the Korean Peninsula," he said. 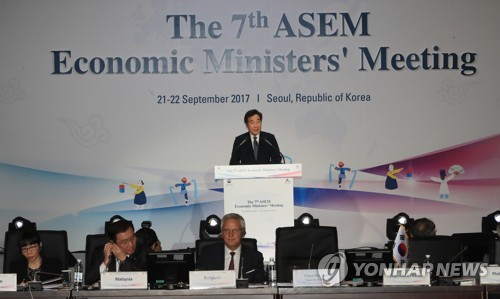