Self-driving cars, including the G80 from Hyundai Motor Co.'s luxury sub-brand Genesis, and hydrogen-powered vehicles will run from Seoul to PyeongChang, according to the Ministry of Land, Infrastructure and Transport. PyeongChang, the host city of the games, is 180 kilometers east of the capital.

At least two G80 vehicles and five hydrogen fuel cell cars are planned to take part in the event, though the number could increase, according to the ministry. The exact date for the drive has not been confirmed, but it is expected to be near the opening day of the quadrennial sports event, which kicks off Feb. 9.

From tollbooths to motorway service areas and interchanges, the vehicles will go through all the major facilities of the highway at speeds set by law, the ministry said.

During the 17-day event, the hydrogen-powered cars will serve as shuttles connecting PyeongChang Olympic Stadium, where the opening and closing ceremonies will be held, and a sports venue 4 kilometers away.

The vehicles to be used during the Olympics will all meet "level 3" international standards, which require that cars take full control of all critical safety functions, yet still need a driver at the seat.

Hyundai has been putting considerable effort in becoming a leading player in the emerging market. Globally, driverless cars are forecast to hit the road within the next several years.

The ministry said the National Geographic Information Institute (NGII) and Hyundai's navigation software development unit are creating detailed maps together that can be used in autonomous cars. 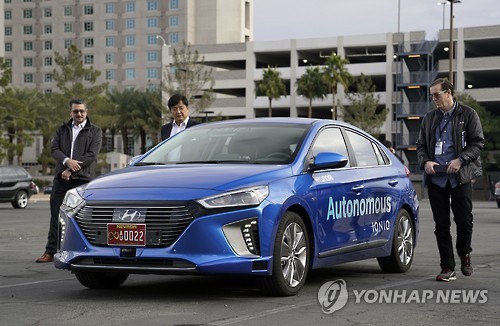 In this undated photo provided by Hyundai Motor on Dec. 20, 2016, members of the media look at the autonomous version of the carmaker's Ioniq ahead of a self-driving road test in Las Vegas. The test, held on Dec. 15, covered real-life street driving in the daytime and at night over a distance 4 kilometers. (Yonhap)