(SEOUL=Yonhap News) Anglo-Dutch consumer goods company Unilever said Monday it has agreed to acquire a South Korean cosmetics firm for 2.27 billion euros (US$2.7 billion) as it attempts to tap deeper into the Asian beauty market.

The deal delivers a whopping profit for the two global investment companies which purchased a 60-percent stake in Carver Korea for 430 billion won ($397 million) in June last year.

The contract also marks the largest merger and acquisition deal ever for a South Korean cosmetics firm.

"We are delighted to be acquiring Carver Korea," Alan Jope, Unilever President Personal Care said in a press release. "It will significantly strengthen our position in North Asia, the largest skincare market in the world."

Founded in 1999, Carver Korea is known for its signature brand AHC under which it makes products for age management, hydration and nourishment. AHC's products also include moisturizers, toners and sun protection.

Carver Korea's stellar performance is in stark contrast to its bigger local rivals such as AmorePacific Co. which have suffered a sharp drop in sales and profitability amid a growing diplomatic row with China over the deployment of an advanced U.S. missile shield system in South Korea.

"South Korea is the fourth-largest skincare market in the world," the company said in the statement. "Carver has a very strong position in this space, and it will therefore strengthen Unilever's expertise in the Asian beauty market." 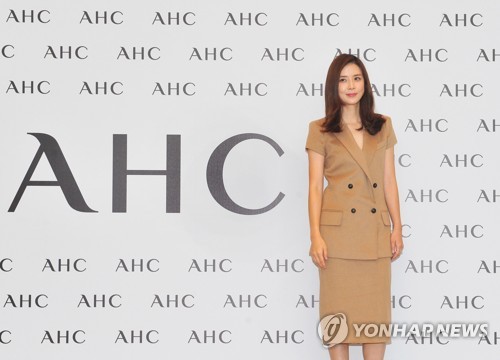 In this photo provided by AHC, cosmetics brand under Carver Korea, South Korean actress Lee Bo-young poses for a photo in front of a photo wall in Seoul on Sept. 5, 2017. (Yonhap)