(SEOUL=Yonhap News) Google Korea, a local unit of Internet giant Google Inc., said Thursday that it has helped South Korean nonprofits and startups over the past year to tackle some of the country's tougher social challenges in line with its corporate social responsibility commitment.

Earlier in the week, the five nonprofits and public charities picked last year gathered to share their vision for using technology to change the world as part of the grant program "Google Impact Challenge," the first of its kind in South Korea.

The five winning projects have received a combined 3.5 billion won (US$3 million) in grant funding for two years starting in 2016, as well as mentorship from Google experts and local support partner Ashoka, to help them bring their projects to life.

"Google believes technology can make the world better and faster," said Lois Kim, a Google Korea official, noting that the grant program gives back to local communities and shares Google's technological expertise in solving issues such as education, jobs and disabilities.

The grant program picked five finalists from hundreds of applicants through a public vote and a panel of judges from all different areas. The focus of the judging was innovative ideas on how they would make their community a better place.

"I think the biggest asset of the Google Impact Challenge is that nonprofits have freedom when using the funds," said Kang Dong-joo, head of Like Lion. "Other government grant funds have a lot of limitations, which usually act as a huge hurdle for small organizations like us."

Like Lion is a Seoul-based startup that provides Web programming education about creating various IT services to students with no background in computer education. The firm provides a comprehensive set of quality lectures and assignments through its local online platform.

Originally a frat club at a university in Seoul, the startup has now grown into a corporate nonprofit that has taught nearly 2,000 students from 130 universities worldwide.

"Besides funding, we also received hands-on support from Google experts," said Kang, adding that Google has helped the startup to apply technology in an innovative manner to solve some outstanding problems.

FLYR, a nonprofit organization with less than 10 employees, receives leftover flowers from wedding venues and other kinds of events and donates them to those in need, such as seniors in various facilities.

"Google engineers helped FLYR in many ways such as building an online platform," said Kim Da-in, a FLYR official, emphasizing that the funding program is not only about providing the money but also sharing Google's technological background.

Google Korea said 10 of its consultants, mostly engineers, from the global office are acting as "Google Ambassadors" for the selected teams to help them lay the groundwork before executing their projects.

Industry data showed an increasing number of corporations, including multinational and local businesses, are expanding their commitment to corporate social responsibility.

A total of 255 companies provided 2.92 trillion won to social welfare programs ranging from scholarships and daycare centers to parks and welfare facilities in 2015, according to a report by the Federation of Korean Industries (FKI). The figure represents a 7.8 percent increase from 2.71 trillion won in 2014, according to the FKI.

The contributions come as many South Koreans call for greater social responsibility by firms in recent years amid the widespread perception that businesses are not doing their part to bridge the wealth gap.

"Companies are now acting in a leading role of not just making contributions and donations but also participating in various activities that can actually lead to changes in society," said Lee Yong-woo, an FKI official. 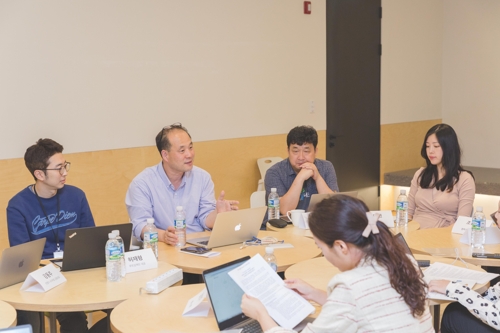