South Korea, China and Russia have agreed to embark on a project to open a new trade route that will link the three neighbors through land and sea, a move expected to significantly cut journey time and transportation costs.

The first meeting by the three countries, dubbed the Northern Economy City Council, will be held in Korea’s southeastern port city of Busan on Wednesday and attended by key officials from the three countries. Two possible trade routes, including one running across Harbin-Vladivostok-Busan and another through Hunchun-Zarubino-Busan, are to be discussed at the meeting, according to the Busan city government on Sunday.

The meeting will be held at a time when the Chinese government is seeking a new maritime route for Harbin and Hunchun, landlocked cities that have so far relied on long, expensive land routes. To reduce journey time and costs, China has been trying to forge new sea routes through the eastern port cities of Zarubino and Vladivostok in Russia.

The distance between Harbin and Dalian port, which currently serves as China’s major trading port, is about 1,200 kilometers, but the traveling distance from Harbin to a new port in Vladivostok would be 220 kilometers. The distance between Hunchun and Zarubino port will be only 80 kilometers, allowing traders to save up to 40 percent in shipping costs, according to the latest studies by the three countries.

The Korea-China-Russia Northern Economy City Council was first conceived when Seo Byung-soo, Busan mayor, visited Vladivostok in July to celebrate the 25th anniversary of their sister-city partnership. Busan and Vladivostok had agreed then to form a consultative body to promote a new maritime trade route and later drew the participation of China’s Jilin and Heilongjiang provinces. 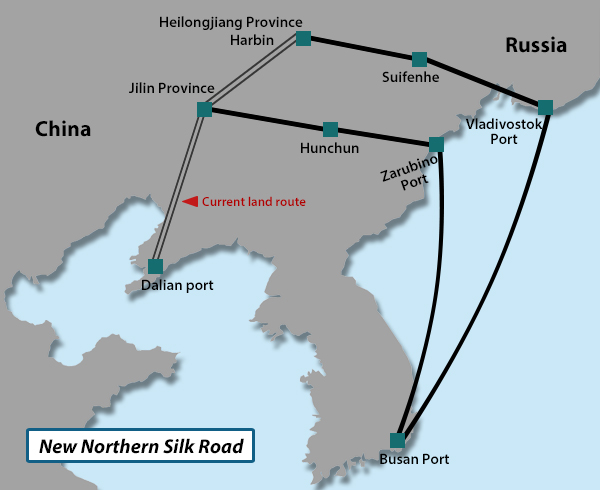