SK Biotek Co., a South Korean manufacturer of bulk pharmaceuticals, said on Monday it has completed a new manufacturing factory in Sejong at the Myeonghak industrial complex in Sejong.

With the new production lines, the company wholly owned by SK Holdings, the holding company of SK Group, will be able to roll out a total of 320,000 liters of active pharmaceutical ingredients per day, with half from its existing plant at the Daedeok industrial complex in Daejeon.

The Sejong factory commanding a space of about 10,000 square meters on four floors will produce APIs to be used for treatment of patients with diabetes, AIDS and hepatitis C infection.

SK Biotek expected its new factory alone would generate about 60 billion won ($53 million) in sales next year. It plans to add more production lines for the next three years to expand its capacity to the country’s largest level of 800,000ℓ by 2020 on expectations that the global pharma market will grow by 7 percent per year to reach 85 trillion won by 2020.

The company has an operating margin of about 30 percent higher than that of its industry peers with production of ingredients near patent expiration instead of cheap generics. Most of its products are exported to global pharmaceutical companies including Novartis and Pfizer.

In June, SK Biotek took over U.S.-based pharmaceutical company Bristol-Myers Squibb Co. (BMS)’s factory in Swords, Ireland to secure a base for production and sales in Europe. 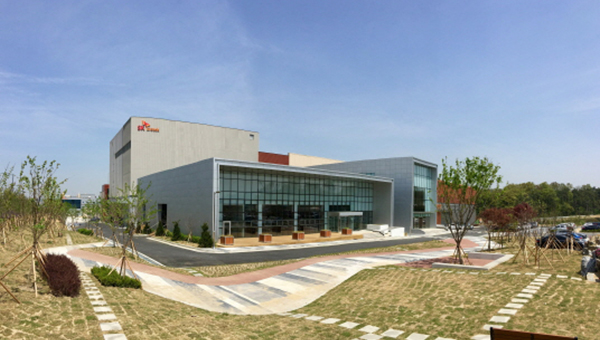