According to data compiled by the Ministry of Culture, Sports and Tourism, 8.87 million people visited 108 major tourist attractions in South Korea during the 10-day Chuseok break, the country's autumn harvest celebration, up 59.6 percent from 5.56 million tallied last year.

This year, the holiday ran from Sept. 30 to Oct. 9, including two separate national holidays and two weekends. The ministry said last year's numbers included tallies taken from two weekends and weekdays around Chuseok for a better comparison to this year.

The combined tally for two branches of the National Museum of Modern and Contemporary Art (MMCA) also surged 60.49 percent on-year to 171,810 from 107,054 during the cited period, according to the data.

The government has been ramping up efforts to beef up the local tourism industry in the face of a sharp drop in the number of Chinese visitors following Beijing's apparent retaliation against Seoul's deployment of a U.S. anti-missile system.

Since mid-March, the Chinese government has banned its tour agencies from selling package tours bound to South Korea after the Seoul government decided to deploy the Terminal High Altitude Area Defense system. 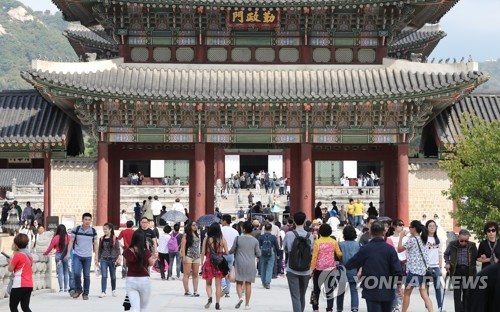 This photo, taken on Oct. 8, 2017, shows Gyeongbok Palace in Seoul crowded with tourists near the end of the Chuseok holiday which ran from Sept. 30 to Oct. 9. (Yonhap)