(SEOUL=Yonhap News) Britain on Wednesday launched an automotive campaign in South Korea in a move to seek business opportunities with local companies in "next-generation" vehicle technologies, the British Embassy said.

The Automotive is GREAT campaign is aimed at promoting Britain's advanced technologies in less-emitting, autonomous and other future vehicles and looking for business deals with South Korean auto and auto components makers.

"Automotive is GREAT will showcase the strengths of U.K. autonomous production, design and technology and its global leadership in the future vehicle trends such as low carbon, autonomous and connected vehicles," British Ambassador to South Korea Charles Hay said in a press briefing on the country's automotive industry.

The campaign will last 18 months through the 2019 Seoul Motor Show scheduled to open in late March or early April, he said. 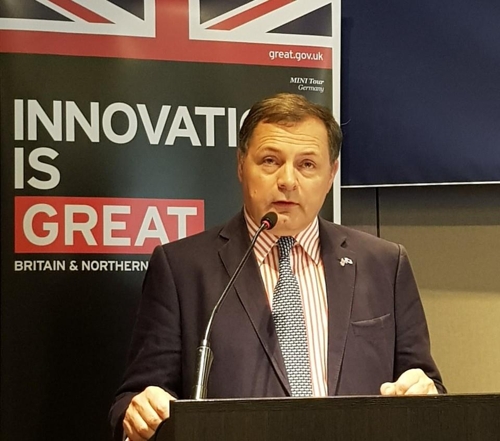 In this photo taken on Oct. 18, 2017, British Ambassador to South Korea Charles Hay holds a briefing on Britain's auto industry and possible business ties with South Korean companies at a press conference held in Seoul. (Yonhap)

The ambassador said global carmakers such as Rolls-Royce Motor Cars Ltd. and Jaguar Landrover still make cars in Britain with local expertise, labor and parts though some of these companies are not British-owned.

Rolls-Royce Motor is the luxury car affiliate of Germany's BMW Group and Jaguar Landrover is a unit of Tata Motors Ltd. of India.

"That's because much of the design and innovation that goes into these vehicles comes from the cutting edge R&D that originates in the U.K.," he said.

Helped by OEM productions of some Ford Motor Co. and Toyota Motor Corp. vehicles in Britain, vehicle production there reached a record 1.8 million last year and the figure is projected to mark 2 million by 2020, the embassy said.