(SEOUL=Yonhap News) A South Korean economic delegation sent to the Middle East held talks with local firms worth around US$410 million that could lead to actual deals down the line, a trade promotion agency said Thursday.

The delegation composed of 13 small and medium-sized companies has been in Saudi Arabia and the United Arab Emirates since Sunday, the Korea International Trade Association (KITA) said in a statement. The group is expected back on Friday.

In the two rounds of business-to-business talks held in the Middle Eastern countries, Korean firms discussed potential deals with some 80 local buyers, it said.

As the UAE and Saudi Arabia plan to reduce their heavy reliance on oil and diversify their industries, Korean firms need to join hands with local partners in the countries to win the "public-private partnership" projects, KITA said. It added companies need to do more to make headway in the fields of renewable energy, health and medical and education services, it said. 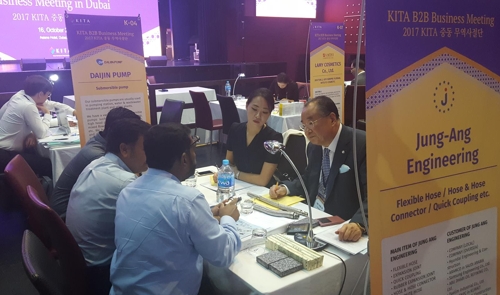 In this photo taken on Oct. 16, 2017 (local time) and provided by KITA, a Korean businessman is in talks with local buyers in the United Arab Emirates for a possible deal. (Yonhap)