(SEOUL=Yonhap News) The South Korean government on Tuesday confirmed its plan to restart the construction of two stalled nuclear reactors but vowed to scrap plans to build six new units as part of its strategy to gradually phase out atomic power.

The Ministry of Trade, Energy and Energy officially announced the decision on the Shin Kori 5 and 6 units in the southeastern city of Ulsan after President Moon Jae-in accepted a civilian panel's recommendation in a Cabinet meeting earlier in the day.

The reactors were about 30 percent complete before their construction was suspended in July, and the state-run Korea Hydro & Nuclear Power (KHNP) Corp. had already spent about 1.6 trillion won (US$1.4 billion) on the project.

With the decision to restart work, the ministry said the KHNP will consult with its contractors to confirm the level and scope of compensation.

The KHNP earlier estimated about 100 billion won is needed to reimburse their expenses spent during the break in construction and related financial losses. Its board of directors will discuss the exact amount of compensation during a meeting Thursday.

The KHNP plans to remove covers on the construction site to immediately start work and consult with the state nuclear watchdog on matters requiring regulatory approval.

Despite the government's decision to proceed with the ongoing project, Energy Minister Paik Un-gyu said the government will cancel the construction of six new reactors and push for an early closure of Wolsong-1 in the southeastern city of Gyeongju. It is now the nation's oldest reactor after Kori-1 was permanently shut down in June.

"Although construction will resume on the Shin Kori 5-6 units in accordance with the public debate's recommendation, we will nullify new construction plans," Paik said in a briefing. "We will ban the extension of the operational life cycle and close Wolsong-1 earlier than scheduled, checking the power supply and demand in the country." 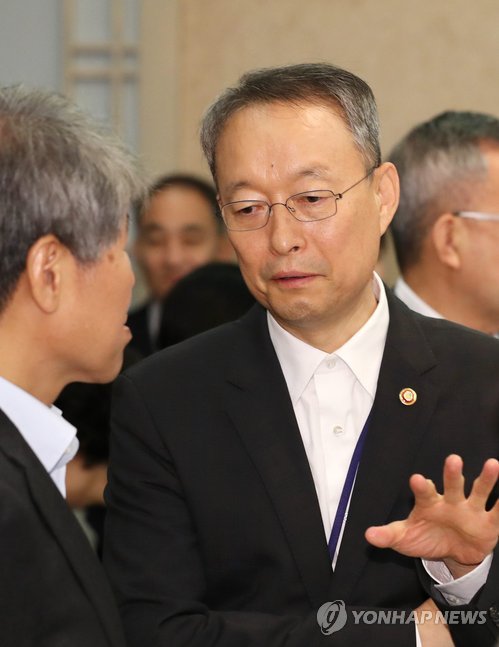 Paik Un-gyu, minister of trade, industry and energy, speaks after a Cabinet meeting at the presidential office on Oct. 24, 2017. (Yonhap)

The government said it will gradually phase out nuclear power to decrease the number of reactors to 14 in 2038. Such a move will be included in the long-term energy supply plan to be released next month.

Instead, the government will increase the ratio of renewable energy to 20 percent in 2030, from the current 7 percent.

The ministry also said it will accept the 471-member panel's recommendation to step up nuclear safety as most of reactors are located on the southeastern coast that has been rocked by earthquakes. The power plants, moreover, are close to population centers, including Busan, Ulsan and Gyeongju.

"The government will expand investment to secure the safety of reactors aged over 25 years and enable all nuclear plants to withstand a quake stronger than 7.0 magnitude by June 2018," he said.

In light of the closure of the Kori-1 reactor, the government vowed to step up research and development of decommissioning technology to safely dismantle the nuclear facility and store the nuclear waste.

Under the new energy initiative, the KHNP will be reorganized to focus on safety management of nuclear reactors and decommissioning efforts, the ministry said.

"The government will push for the establishment of a nuclear decommissioning research institute in the southeastern region to make inroads into the global market for the safe dismantling of reactors," the policymaker said.