(SEOUL=Yonhap News) A unique distribution system is behind the global popularity of South Korean cosmetic brands, the new head of an international association of cosmetic scientists said.

Kang Hak-hee, who on Wednesday became the President of the International Federation of Societies of Cosmetics Chemists (IFSCC), said local brands operating their own stores allowed them to unfold their own marketing strategies.

"If there were no independent stores run by cosmetic brands, the products, no matter how good they are, would have died out unless they were picked up by distributors," Kang said in an interview with Yonhap News Agency on Tuesday on the sidelines of the 24th IFSCC conference in Seoul which ran from Monday to Wednesday.

He also said the introduction of a series of global hit products, such as cushion foundation and makeup base cream known as BB cream, led to the establishment of Korean cosmetics' reputation.

"AmorePacific, among others, played a key role in promoting Korean products abroad by focusing on developing items with a local touch, using ingredients such as ginseng, bean and green tea," Kang said.

Kang is the co-representative of Korea Kolmar Co., an original development manufacturing (ODM) cosmetics firm, and previously worked as the chief technology officer of AmorePacific Corp., the country's No. 1 cosmetics company. 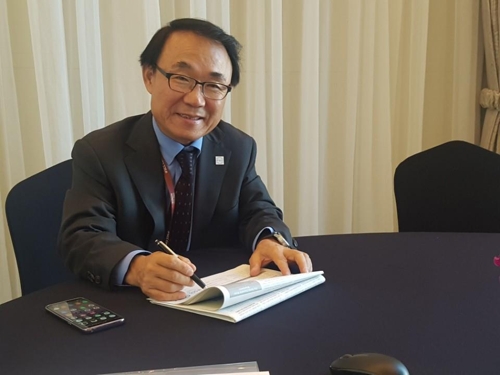