In another positive sign about a recovery in the Korean economy, consumer confidence rebounded in October after sagging for two straight months amid escalating geopolitical risks from North Korean provocations and unfavorable trade conditions in China and the United States

According to data released by the Bank of Korea (BOK) on Friday, the nation’s composite consumer sentiment index (CCSI) for October reached 109.2, up 1.5 percentage points from the previous month. A reading above 100 indicates that consumers are more positive than negative about the economy.

The improvement in consumer sentiment comes as the BOK on Thursday released a surprising 1.4 percent on-quarter gain in the third quarter gross domestic product, raising expectations that the economy could expand by more than 3.0 percent after hovering below the growth potential rate for years except for 2014.

Consumer confidence improved for six months in a row to reach the best in six and a half years in July, but sentiment soured from August, slipping 1.3 percentage points on month and 2.2 percentage points in September as North Korea upped provocations and engaged in war talk with the U.S. China also turned more hostile towards Korea over installment of U.S. antimissile system Terminal High Altitude Area Defense (THAAD).

The survey for this month was conducted between Oct. 13 and Oct. 20 right after the week-long Chuseok holiday on 2,200 households across the country, of which 2,020 households responded. 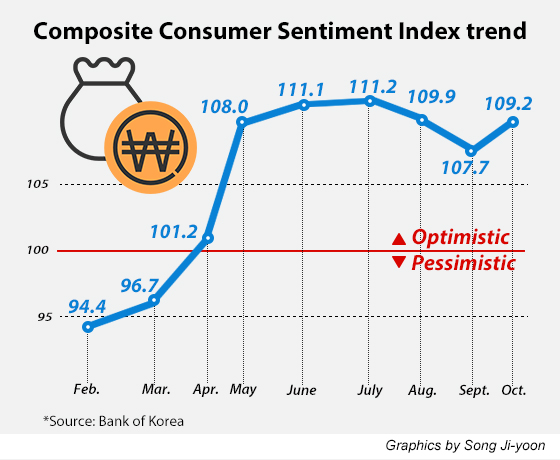 By Lee Seung-yoon and Cho Jeehyun