(SEOUL=Yonhap News) Cargo processed at South Korean ports rose 5.5 percent in the first nine months of 2017 compared with a year ago, driven by robust exports of vehicles and imports of soft coal and cement, government data showed Monday.

The total amount of seaport cargo stood at 1.18 billion tons in the January-September period, up from 1.11 billion tons tallied a year earlier, according to the data by the Ministry of Oceans and Fisheries.

Shipments of automobiles showed the largest growth of 19.1 percent, while cargo volumes of soft coal and cement gained 15.3 percent and 13.8 percent, respectively.

In contrast, traffic of sand and steel dropped 26.1 percent and 12.3 percent, respectively, over the period, the ministry said. 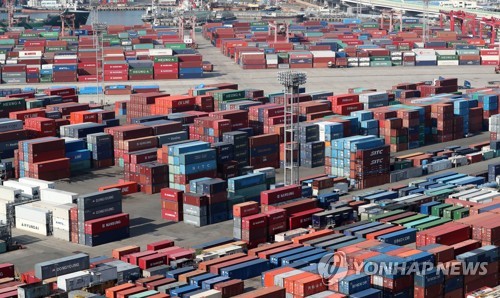 Containers are piled up at the Port of Busan, South Korea's largest port on the southeastern coast, on Oct. 26, 2017. (Yonhap)

Trade shipments have been on a steady climb as Asia's fourth-largest economy has seen its exports gain ground since November on the back of recovering world trade and rising oil prices.