Production in the mining, manufacturing, gas and electricity industries climbed 0.1 percent on-month in September, following an adjusted 0.1 percent rise in the previous month, according to the data by Statistics Korea.

It is the first time in more than four years that the figure has remained in positive terrain for three months in a row.

Production in the service sector added 1.3 percent on-month, with a 5.4 percent on-year rise.

Retail sales gained 3.1 percent on-month, turning around from a 0.9 percent drop in August.

For all industries, production rose a six-month high of 0.9 percent.

The statistics office said an upturn in car production and transportation equipment contributed to the uptick in September figures.

Production of vehicles rose 3.8 percent last month from a month earlier, swinging from a 4.5 percent fall in the previous month, while numbers for transportation equipment jumped 19.6 percent on-month to snap a three-month losing streak.

"Some carmakers experienced a production drop in August due to a partial strike," said Eo Woon-sun, director of the short-term industrial statistics division at Statistics Korea. "In September, strikes ended, and their production recovered."

Moreover, private consumption joined the upside cycle in September ahead of the weeklong Chuseok holiday in the beginning of October.

He said the economic data will likely continue the upside trend for the rest of the year to spearhead an estimated 3 percent growth for 2017.

"Nearly all numbers of service production, retails sales and facility investment improved last month," the official said. "We may see a slight drop some time in the near future, but there are optimistic factors before us, such as strong exports, a favorable stock market and better consumer confidence."

The latest central bank data showed that Asia's fourth-largest economy increased 1.4 percent in the July-September period from three months earlier, marking the sharpest increase since the second quarter of 2010, when the economy shot up 1.7 percent.

The third quarter growth suggests that South Korea is almost certain to meet or surpass the government's growth target of 3 percent. 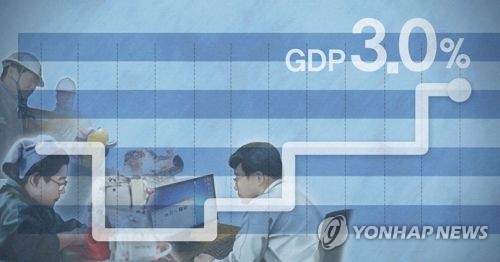