(SEOUL=Yonhap News) The state-run Korea Electric Power Corp. (KEPCO) has looked into the potential for a power grid project in Northeast Asia encompassing South Korea, Japan, China and Russia, and concluded that it is feasible if the countries work together, the utility company's chief executive said Thursday.

"We have carried out a preliminary feasibility study on the project and concluded that it is feasible economically and technically," CEO Cho Hwan-eik told reporters on the sidelines of the Bitgaram International Expo of Electric Power Technology (BIXPO), a power industry exhibition hosted by KEPCO. 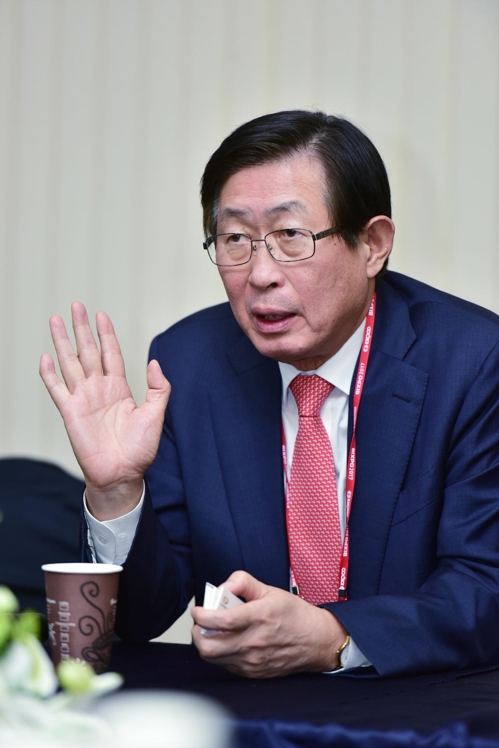 Cho Hwan-eik, CEO of the state-run Korea Electric Power Corporation, speaks during a meeting with reporters on Nov. 2, 2017, on the sidelines of the Bitgaram International Expo of Electric Power Technology held in Gwangju, in this photo provided by the company. (Yonhap)

KEPCO has already been working on a project to link an electricity grid with China's State Grid Corporation of China (SGCC), Japan's SoftBank and Mongolia's energy development company Newcom.

The demonstration project is aimed at building a 2-gigawatt complex that can produce solar and wind power in Mongolia and a seabed power grid connecting the three nations.

But it has expanded the scope of the project to include Russia after President Moon Jae-in suggested a Northeast Asia supergrid to enhance regional energy cooperation during his address to the third Eastern Economic Forum held in Vladivostok in September.

"Leaders of the nations shared the consensus that a regional energy grid system is needed to link Northeastern nations during the Eastern Economic Forum," Cho said. "The project will go beyond economics and can ease tension in the Northeast Asian region."

Cho said he will discuss the issue with Russian counterparts when the Minister for Development of the Russian Far East visits South Korea next month.

The official also said working-level talks are underway in regards to buying a stake in Toshiba's NuGen nuclear project in Britain as part of its efforts to expand its global footprint.

"Toshiba is hoping to carry forward the project in accordance with the timeline, but we are cautiously reviewing risks," Cho said.

NuGen in Moorside, northwest England, is expected to provide around 7 percent of Britain's electricity when built, but has been thrown into doubt after developer Toshiba's nuclear subsidiary Westinghouse went bankrupt earlier this year.