On Wednesday, Yuhan Corporation announced it earned 66.5 billion won ($59.8 million) on a non-consolidated basis in the first nine months of this year on sales of 1.08 trillion won, becoming the first Korean drug company that has hit a revenue milestone of 1 trillion won for three quarters.

The company’s full-year sales have surpassed 1 trillion won since 2014, with the sales increase driven not only by strong results from in-licensed brands such as hepatitis treatment Viread and diabetes treatment Trajenta but by its own novel drug Rosuvamibe. Sales of the hyperlipidemia drug reached 15.3 billion won in the first three quarters this year, up a stunning 253.2 percent from a year earlier.

Green Cross achieved 356.1 billion won in sales on a consolidated basis for the July-September period alone, the best quarterly performance in its history. Sales for the first three quarters grew 9.7 percent on-year to 961.6 billion won, nearing the 1 trillion won level, on strong sales from its key vaccine and blood products. Exports of intravenous immunoglobulin and other human plasma-derived therapeutic proteins grew by double digits. Such exports are poised to grow further now that the company’s biopharmaceutical plant is fully operational in the United States. 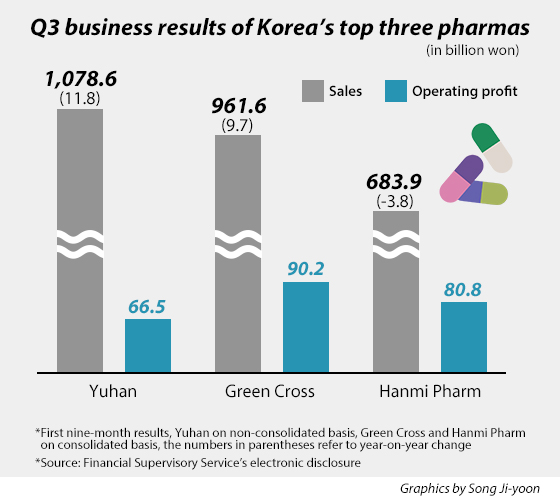 By Kim Hye-soon and Minu Kim