(SEOUL=Yonhap News) The South Korean government said Thursday that it will inject a combined 30 trillion won (US$26.9 billion) in the next three years to foster innovative startups and venture firms in a way to create a virtuous business cycle and secure a new growth engine.

Under the comprehensive plan endorsed by a ministerial level meeting chaired by Finance Minister Kim Dong-yeon, the government will focus on expanding money supply for fledgling enterprises and creating a generally venture-friendly environment.

"The venture capital market in South Korea has been in the doldrums since the IT boom ended in the mid-2000s," a government official said. "The latest plan is aimed at encouraging talented young people to start their own business and supporting their growth."

It will first create a 10 trillion-won fund in the coming three years to help innovative venture firms get necessary investment from the outset.

Funded by state policy lenders, such as the Korea Credit Guarantee Fund and the Korea Technology Finance Corp., a 20 trillion-won lending program will also be available for startups.

The government will pick 20 best companies every year and grant them up to 4.5 billion won each, and assist them in growing into "unicorns," referring to private companies valued at $1 billion or more.

The government, in addition, will reduce taxes on profits gained from stock options in startups in order to attract talented people to the sector.

In order to help startups raise funds more easily via stock sales, the government will boost the second- and third-tier exchange markets, such as the tech-heavy KOSDAQ and 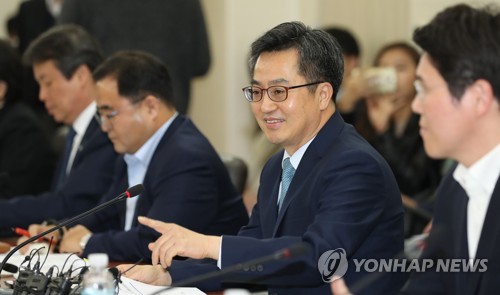