South Korea’s current account surplus stretched to its biggest-ever in September as it extended the surplus streak to the 67th consecutive month, fueled by robust exports on recovery in the global economy.

According to preliminary balance of payments data released by the Bank of Korea on Friday, the nation’s current account surplus surged to a new record-high of $12.21 billion in September, more than doubling from the previous month and up 51.3 percent from $8.07 billion a year ago.

The sharp gains in the current balance largely owed to trade.

The surplus in goods account rose 41 percent to $15.01 billion from $10.66 billion a year ago to a historic high. The cumulative goods account surplus in the nine months of this year reached also the largest-ever of $93.38 billion.

Exports jumped 25.5 percent to $55.09 billion thanks to semiconductor shipments.

Service account deficit in September widened to $2.9 billion from $2.58 billion a year ago due to downturn in travel account. 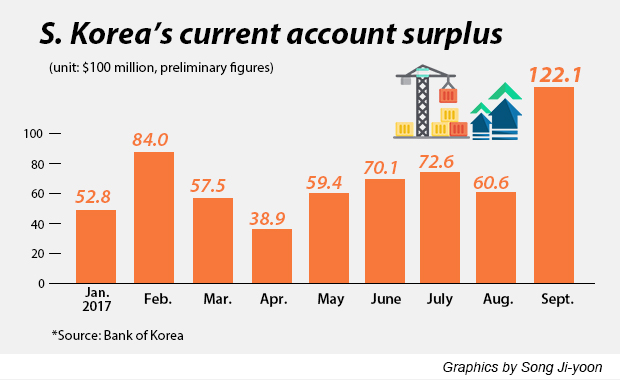 By Sohn Il-seon and Lee Ha-yeon