(SEOUL=Yonhap News) Major foreign investment banks (IBs) have revised upward their growth forecasts for the South Korean economy on its brisk exports and better-than-expected expansion for the third quarter, a report showed Tuesday.

According to the report by the Korea Center for International Finance (KCIF), Barclays, JP Morgan, Goldman Sachs, Nomura and five other foreign IBs forecast Asia's fourth-largest economy to grow at an average rate of 3 percent in 2017.

The forecast, made at the end of last month, is up from the median growth projection of 2.8 percent presented a month earlier. The IBs alwo revised up their 2018 growth forecast for the economy to 2.8 percent from 2.6 percent over the cited period.

Despite the long Chuseok holiday, South Korea's exports climbed 7.1 percent on-year to US$45 billion in October on strong overseas demand for semiconductors, ships and petrochemical products. In September, overseas shipments shot up 35 percent on-year to an all-time high of $55.1 billion.

Foreign IBs became more bullish as South Korea's economy grew 1.4 percent in the third quarter from three months earlier, according to the report.

Of the nine foreign institutions, five upgraded South Korea's 2017 growth predictions and the others remained the same, with Goldman Sachs raising its outlook to 3.2 percent from 2.8 percent over the one-month period.

For 2018, Barclays, JP Morgan and Goldman Sachs revised up their growth projections, while the remainder retained their previous forecasts.

Foreign IBs' predictions for this year are in line with those made by the South Korean government and the country's central bank, but they are more pessimistic about next year's performance.

South Korea's finance ministry has predicted the economy to expand 3 percent in 2017 and 2018, respectively, while the Bank of Korea has put forward a forecast of 3 percent for this year and 2.9 percent for the coming year. 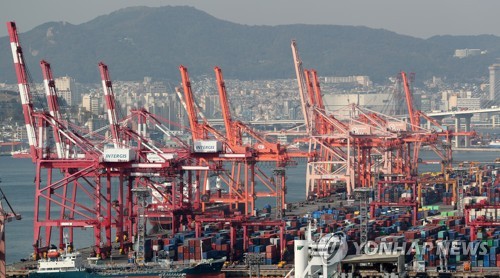