Pyeongtaek Port, once a key trade port of the ancient Silk Road, will become a gateway to the new OBOR network when the center opens, and function as a Northeast Asian hub for trade and cultural exchange with China, as well as between other OBOR participant countries.

SICO plans to build the new center on about 991 square meters of land inside the Hyeondeok District near Pyeongtaek Port. The period of construction will be decided on a later date.

An international non-governmental organization and United Nations cooperation agency registered in Geneva, SICO is in charge of matters of cultural and economic exchange between China and the 65 countries along the newly envisioned OBOR Silk Road.

Last year, a SICO Representative Office was established in Korea .

Meanwhile, a total of KRW 750 billion is being injected into creating the Chinese-friendly Hyeondeok District on a 2.32-million-square-meter site across the villages of Jangsu-ri and Gwongwan-ri in Hyeondeok-myeon, and Sinyeong-ri in Poseung-eup, all located within Pyeongtaek City's YESFEZ. Once construction ends in late 2018, the site will start looking for tenants.

At the signing, YESFEZ also promised SICO preferential treatment and one-stop administrative services should it attract OBOR-related investment to the FEZ, while SICO vowed to actively promote investment in Gyeonggi Province to OBOR member states and related countries.

The two organizations also agreed to hold forums and seminars on developing joint projects and improving the logistics industry between Korea and China.

YESFEZ expects the new center to make a significant contribution to expanding trade and cultural exchange between OBOR member states and companies and organizations in the Pyeongtaek region, as well as the rest of the country.

Moreover, it is expected to help thaw the relationship between the two countries, encouraging more Chinese companies to invest in the Hyeondeok District.

Since Janury 2016, YESFEZ has been maintaining contact with Representative Li Xian Hu of the SICO Korea Office, and discussed on participation in the OBOR InItiative.

On September 28, Vice President Xia visited Gyeonggi Province and Pyeontark Port to discuss the modes of cooperation in OBOR.

Chairwoman Lee noted, "YESFEZ considers the signing the first step in transforming the area into a center for trade and exchange with China, and an important gateway to the new Silk Road that connects as far away as Europe." 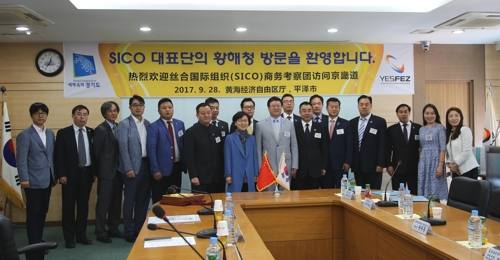