The South Korean government turned more upbeat about the economy upon assessing sustainable pickup in consumer spending on top of favorable conditions on the external front due to recovery in global economy.

“Exports and manufacturing activity continue to grow led by the recovery in the global economy. Moreover, consumption has finally begun to pick up and will likely keep up growth due to global demand and supplementary government spending,” the finance ministry said in its monthly report on the economy.

The tone on domestic demand has turned more optimistic as it has stayed uncertain about the recovery phase until October issue.

The number of newly hired increased sharply to 314,000 in September from a year ago. Industrial output in September gained 0.1 percent on month, increasing for three months.

Retail sales were up 3.1 percent on month, compared with a 0.9 fall in August, benefiting from the Chuseok holiday and release of new smartphone models.

Outlook on the export-reliant Korean economy improved on better-than-expected performance on the global front. The Bank of Korea last month upgraded its forecast for this year’s annualized growth to 3.0 percent. The International Monetary Fund also raised its growth outlook for the Korean economy to the same level. 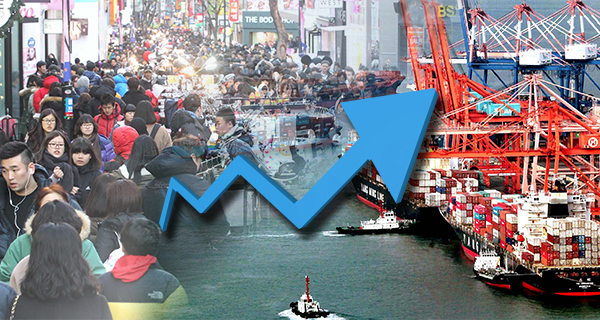 By Cho Si-young and Cho Jeehyun