Choi Jong-ku, chairman of the Financial Services Commission (FSC), made the remark at an annual financial forum between the two nations in Seoul.

In his opening remarks, Choi said Britain "has traditionally been a leader in finance and continues to lead in recent trends, including fintech, which provides useful policy implications for Korea."

Britain's fintech-related transactions have grown at an annual growth rate of more than 70 percent since 2008, Choi said.

"Behind the rapid growth of the fintech industry is the British government's active support and regulatory reforms," the FSC head said.

Choi also hailed Britain's initiative to adopt a regulatory "sandbox," which allows startups to test real-world financial customers with a degree of regulatory leeway before they launch a full-scale financial product.

During the forum, Andrew Bailey, chief executive officer of Britain's Financial Conduct Agency, briefed audiences about its project on how the aging population would impact the financial services industry.

The British agency launched the project in 2016 to explore the policy implications of an aging populating on the financial industry.

Bailey noted that the role of financial regulators needs to evolve with the aging population, corresponding to changes in financial services. 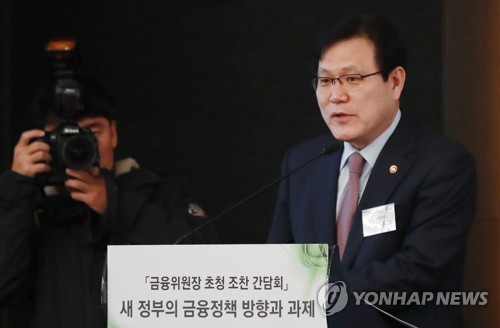