Korea is expected to make a comeback to the so-called $1 trillion trade club for the first time in three years thanks to record-high semiconductor exports and a surge in oil and raw materials imports.

According to the Korea International Trade Association on Monday, Korea’s exports between January and October this year have jumped 17.3 percent to $475.1 billion from the same period last year and imports 18.7 percent to $392.5 billion. The total merchandise trade volume during the cited period has reached $867.6 billion, suggesting that the country’s total trade volume for full 2017 will top $1 trillion for the first time in three years.

Any country with trade volume marking $1 trillion or above is deemed a global trading giant. In 2011, Korea became the world’s ninth country to break the $1 trillion threshold, and its trade volume had continued to exceed $1 trillion for four straight years until 2014. But with its trade growth losing steam, the country’s trade volume has dipped below the mark in the past two years.

Korea’s return to the $1 trillion trade club largely owes to strong global demand for semiconductors. According to Korea Customs Service, the country’s memory chip shipments in the January-October period this year soared 55.5 percent on year to $75.0 billion and its contribution to total exports expanded to 16.4 percent from 12.6 percent a year earlier.

The Korea International Trade Association forecast this year’s semiconductor export to exceed $90 billion, hitting an all-time high for a single export item in the country.

On top of the record-breaking semiconductor exports, the recent price hike in global crude oil and raw materials have also pushed up the country’s total trade volume in value throughout this year. Korea’s crude oil imports in the January-October period this year are estimated at $46.2 billion, up 36.2 percent from a year earlier. 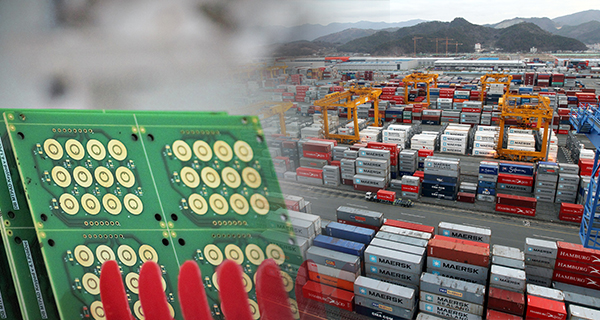