(SEOUL=Yonhap News) Korea's tourism promotion agency said Wednesday it will participate in China's largest tourism expo this week, as the local tourism industry steps up efforts to attract more visitors from the neighboring country amid signs of improvements in Seoul-Beijing relations.

The Korea Tourism Organization (KTO) said it will promote a visit to the country at the three-day China International Travel Mart (CITM), which will kick off in Kunming, southwest China, on Friday.

Major city governments and the operator of South Korea's main gateway Incheon International Airport will join the KTO to restore cooperative relations with their Chinese counterparts which have been soured in the face of a diplomatic row between the two countries over a U.S. anti-missile system, it said.

The Chinese government has banned its travel agencies from selling Korea-bound package tours since mid-March in an apparent retaliation over Seoul's deployment of the U.S. Terminal High Altitude Area Defense (THAAD) system here.

The number of Chinese tourists in South Korea more than halved in September, marking a decrease for the seventh consecutive month. Chinese visitors accounted for nearly half of the 17 million foreigners that visited the country last year.

Local tourism and retail industries have been gearing up for a potential inflow of Chinese tourists after Seoul and Beijing recently said they will put their relations back on track.

The two countries agreed to quickly normalize their ties in a joint statement issued by their foreign ministries late last month, and reaffirmed the stance during their bilateral summit held on Saturday. 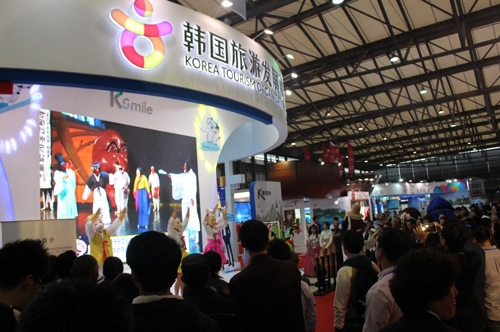