KAI earned a level 5 rating of the Capability Maturity Model Integration (CMMI), which appraises all aspects of a company's aeronautical prowess, as well as the ability to push forward product and process improvements. CMMI was developed by Carnegie Melon University and is used by the U.S. Department of Defense in selecting appropriate firms for software and system development.

South Korea also looks at CMMI level when choosing partners for arms research and development from 2015.

Only about 1,100 companies, or 7 percent of over 15,000 certified aerospace firms worldwide, have received level 5, according to KAI. Only a handful of aeronautics companies have reached the rating, including Boeing and Lockheed Martin, it said.

KAI had obtained the CMMI's top rating in avionics software in 2014. This year, it was given the highest evaluation for software in all areas of aircraft development.

"We will be able to proceed with the development of fighter jets, light armed helicopters and light civil helicopters with more stability as we can expect increased orders, with KAI proving that it has world-class software development capabilities," an official said. 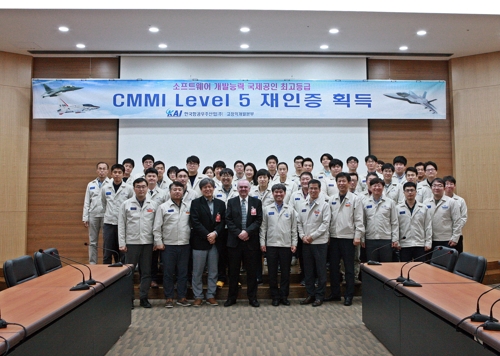