(SEOUL=Yonhap News) Tourism authorities are cranking up promotions to attract foreign visitors to the 2018 PyeongChang Winter Olympics by engaging actively in international travel events across all continents, officials said Wednesday.

The Korea Tourism Organization (KTO) led a large delegation to the China International Travel Mart, one of the largest professional travel exhibits in Asia, held in Kunming from Nov. 17-19. Representatives from 15 local governments and institutions operated a 198-square-meter booth at the event to promote the Winter Games.

"We used the warming South Korea-China relations to market high-quality travel packages and individual tours, and revive the slump in the number of Chinese travelers coming to South Korea," a KTO official said.

To attract Japanese visitors, the KTO worked with the government of Gangwon Province, the host region of the Winter Olympics, and the games organizing committees to jointly operate a booth at Haneda Airport in Tokyo. The booth, in operation from Nov. 1-Dec. 21, is a follow-up to a similar event held from May to July at the same airport to advertise travel opportunities to South Korea. That event drew some 12,400 Japanese and foreign visitors.

The KTO and the Gangwon provincial government arranged a separate invitation of CEOs from 10 leading Japanese travel agencies this month for a tour of key PyeongChang Olympics facilities.

The Ministry of Culture, Sports and Tourism took on Europe, participating in the World Travel Market, rated as one of the three top international exhibits for tourism industries worldwide, in London from Nov. 6-8. This year's event drew 186 countries.

The ministry introduced PyeongChang's tourism infrastructure and Visit East Asia products that link South Korea with other Asian nations during its invitational briefing to Britain's travel officials and media. 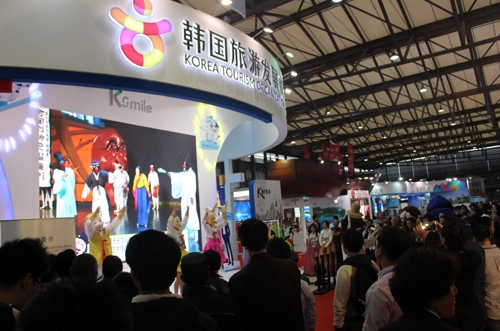