Beijing has decided to partly lift its bans on Chinese people’s group tours to Korea, eight months after it imposed the ban in retaliation against Seoul’s deployment of an U.S. antimissile system.

The China National Tourism Administration on Tuesday announced its decision to allow offline travel agencies in Beijing and Shandong Province to resume the sale of package Korean tour products. An unnamed industry official said the Chinese authority is expected to gradually lift bans on group tours to Korea organized by travel agencies in other parts of the country, albeit not immediately.

The announcement comes almost a month after Korea and China issued joint statements to normalize their ties last month, ending months of diplomatic feud over Korea’s host of the U.S. Terminal High Altitude Area Defense (THAAD) system that China sees as a security threat to it. The agreement involved resuming economic and cultural exchanges and cooperation that abruptly stopped early this year as China immediately launched a series of economic retaliatory measures against Korean businesses amid the THAAD row.

The China National Tourism Administration’s announcement also comes ahead of Korean President Moon Jae-in’s visit to Beijing next month for a summit with his counterpart, President Xi Jinping.

The Chinese authority, however, reportedly maintained its restrictions on Lotte Group, disallowing tour groups’ stays at Lotte hotels and visits to Lotte duty-free stores during their visit to the neighboring country. This would be a big blow to Lotte Group that has expected to see removal of China’s retaliatory sanctions on its businesses amid thawing ties between the two countries. The company has met strong condemnation from China for its decision to hand over its golf course in the southeastern county of Seongju to the Korean government as the site for the THAAD system.

An unnamed official from Lotte Group said the company is looking into the matter to verify the situation.

The Chinese authority was also reported to have directed tourism agencies to avoid selling cheap Korean tour package programs and to maintain ban on the sale of online travel packages to Korea to prevent tourism agencies in other regions from offering unauthorized group tours to the country. Its restrictions on chartered flight and cruise ship operation to Korea also remain intact. 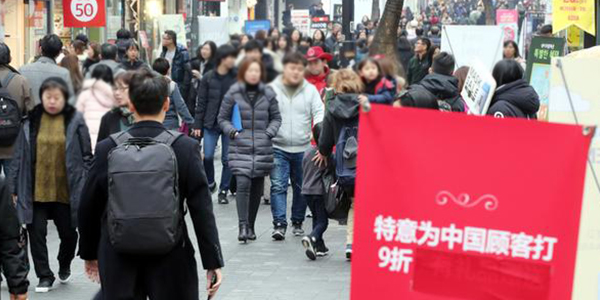 By Lee Yoo-jin and Lee Eun-joo