(SEOUL=Yonhap News) Korea and France agreed to step up cooperation in the energy sector and share expertise in the nuclear decommissioning area as the two nations strive to expand use of clean renewable energy, the Seoul government said Wednesday.

The agreement was reached during a meeting of Korean Energy Minister Paik Un-gyu and the French environment and energy minister, Nicolas Hulot, in Paris on Tuesday, the Ministry of Trade, Industry and Energy said.

As part of the broader plan, the state-run Korea Hydro and Nuclear Power (KHNP) signed memorandums of understanding (MOU) with the state-controlled Electricity of France and nuclear company Areva to step up cooperation in the energy sector and nuclear decommissioning process.

Under the agreement, Korea could benefit from France's experience in decommissioning nuclear power plants. Kori unit-1, which was permanently shut down in June, is the first Korean reactor to be dismantled, which could take at least 15 years.

The French state-controlled utility is in the process of dismantling nine reactors and has 58 others in operation. The reactors supply France with about 75 percent of its energy needs.

The two sides will form a working group to discuss renewable energy, smart grid and nuclear decommissioning, and hold a meeting next year. Areva has leading expertise in decommissioning procedures and fuel reprocessing.

During his visit, Paik also held a meeting with Bruno Le Maire, the French minister of the economy, to discuss ways to step up collaboration in the advanced technology sectors.

Companies of the two nations signed two MOUs on wearable devices based on the Internet of Things and communications technology for autonomous vehicles. 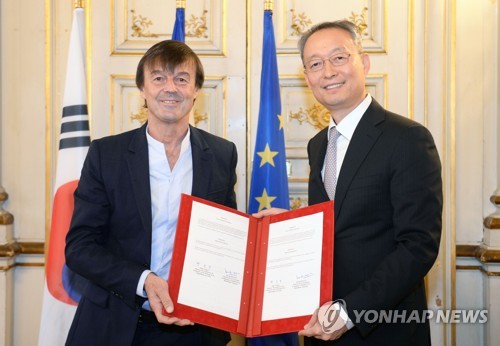 Korean Energy Minister Paik Un-gyu (R) and the French environment and energy minister, Nicolas Hulot, sign a memorandum of understanding on the energy industry cooperation during a meeting in Paris in Nov. 28, 2017, in this photo provided by the Ministry of Trade, Industry and Energy. (Yonhap)