New tech valley to be built in the innovation cluster in Pangyo by 2022
Date
2017.12.01
Views
1118
According to Pulse by Maeil Business News Korea,

A new industrial complex dedicated to boosting future financial industry to prepare for the era of fourth industrial revolution will open in Gyeonggi Province in 2022, the region’s governor said on Thursday.

“We will create a third Pangyo Techno Valley by 2022 to prepare for the future financial industry in the era of fourth industrial revolution,” said Nam Kyung-pil, governor of Gyeonggi Province, in a press conference on Thursday.

The third Pangyo Techno Valley will be built on a 583,581 square meter site in Geumto-dong, Seongnam City, in Gyeonggi, near the second high-tech industrial zone that is currently under construction. Gyeonggi Province will jointly promote the project with Seongnam City, Korea Land & Housing Corporation, and Gyeonggi Urban Innovation Corporation with an aim to complete construction by 2022 after breaking ground in 2020.

Nam said that the third Pangyo Techno Valley will present new lifestyle possibilities in a new era balancing work and family, and city and nature.

The first Pangyo Techno Valley, dubbed as Korea’s Silicon Valley, is located on a 661,000 square meter site in Sampyeong-dong, Bundang, Gyeonggi Province. It is home to 1,306 companies. About 74,000 employees work in the complex that raised 77.5 trillion won in sales last year. The second tech valley, called Pangyo Zero City, is currently being built on a 430,402 square meter site in Siheung-dong and Geumto-dong in Seongnam, Gyeonggi, with an aim to complete construction by 2019. The new complex will accommodate about 750 companies dedicated to developing future technologies such as autonomous vehicles and artificial intelligence. 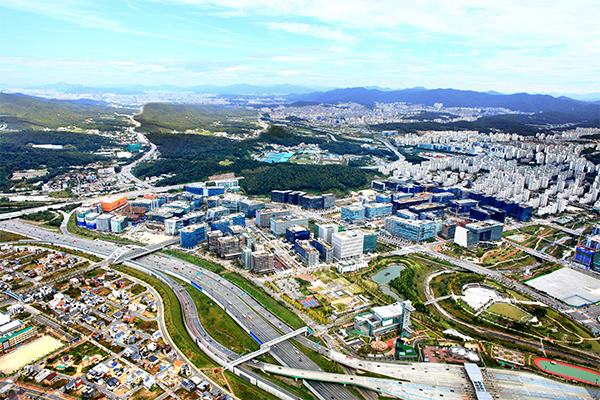 By Hong Jong-sung and Lee Eun-joo