(SEOUL=Yonhap News) The Ministry of Trade, Industry and Energy announced November 29 that it attracted investment worth USD 500 million (based on declared amount) from Europe, thereby reaching its goal for attracting USD 20 billion in foreign direct investment (FDI) for the third consecutive year.

Minister Paik Un-gyu held a round table meeting with investors in London on November 27, and another two days later in Paris, the ministry said.

The U.K. meeting was attended by 14 companies in traditional, as well as new and renewable energy sectors, and nuclear decommissioning.

The round table in France was attended by 12 companies in startup investment, high-quality consumer goods, and environment-friendly industries.

A total investment of USD 500 million was declared as a result of the two meetings, the ministry explained.

With total inbound FDI as of November 29 amounting to USD 20.13 billion, the government has already reached its goal for this year to exceed USD 20 billion for the third year in a row.

According to the ministry, the achievement was made possible by setting the E.U. region, which has recently been reducing its investment in Korea, as a strategic target for carrying out FDI promotion activities.

Meanwhile, Minister Paik explained Korea's strengths as an investment destination to E.U. companies at the two round table meetings.

Despite the internal and external uncertainties, Korea maintains an innovative industrial environment, various advantages for foreign investors, and a vast FTA platform, the minister noted. 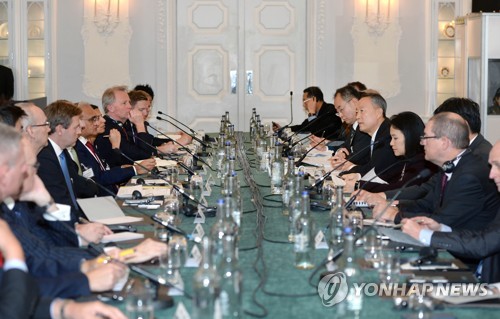