(SEOUL=Yonhap News) Korea unveiled a long-term plan Wednesday to develop unmanned vehicles, such as first passenger drones, with an aim of emerging as a global leader in the sector by 2030, the science ministry said Thursday.

Under the road map crafted and announced by the Ministry of Science and ICT, Seoul will concentrate efforts to boost the development of future-oriented drones, self-driving cars, unmanned ships and agricultural machines.

The ministry earlier designated the sector as one of the key strategic industries that is undergoing fast-paced transformation under the "fourth industrial revolution."

The long-term plan, which is subject to parliamentary endorsement, will allow South Korea to rank third in the industry with a market share of 10 percent by the target year, the ministry said.

"Unmanned vehicles is the sector that needs to be focused on the most," said Lee Jin-kyu, vice minister at the ministry, noting that the government is working closely with leaders from industry and academia to secure core technologies.

Currently, Korea is said to rank seventh in the world in terms of drone technology, but it relies on a lot of imported core equipment. The key parts of autonomous cars, such as cameras and radar, are imported at present.

Among the planned vehicles, local engineers are trying to make human-ferrying aerial drones, also known as flying cars that can carry one passenger in a small cockpit, by 2024, the ministry said.

First, the ministry will inject 12 billion won into securing core technologies next year and another 550 billion won over the following 10 years. 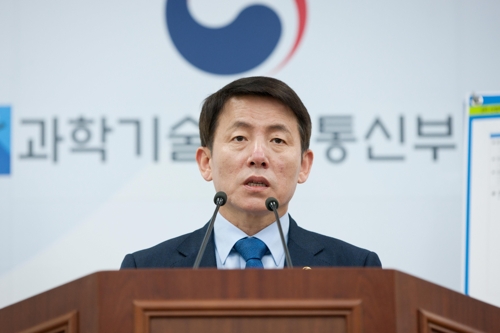 This photo, provided by the Ministry of Science and ICT, shows Vice Minister Lee Jin-kyu talking to reporters about the government's road map for developing unmanned vehicles. (Yonhap)