Korea’s Mirae Asset Financial Group is raising 1.8 trillion won ($1.65 billion) to build an IT and biotech industry cluster in Pangyo Techno Valley on the southern outskirts of Seoul.

Mirae Asset Global Investments Co. said on Monday it is in talks with real estate developer Alpha Dome City Co. to buy land in Pangyo this month. The company plans to generate 800 billion won from its affiliates and the Public Officials Benefit Association and finance the remaining 1 trillion won from bank loans.

Under the plan, two buildings would be built on the 363,000 square meter site. One would be an office space of 264,000 square meters that can house more than 40 companies and 13,000 workers. The rest would be used to build a commercial facility devoted to sports, leisure and entertainment.

Once the land purchase agreement is finalized, Mirae Asset aims to start construction next July and complete the project over the next three years.

Dubbed Korea’s Silicon Valley, Pangyo Techno Valley is an industrial complex for tech firms located in Seongnam, Gyeonggi Province, 30 minutes south from central Seoul. It is home to about 1,306 companies and 74,000 employees. 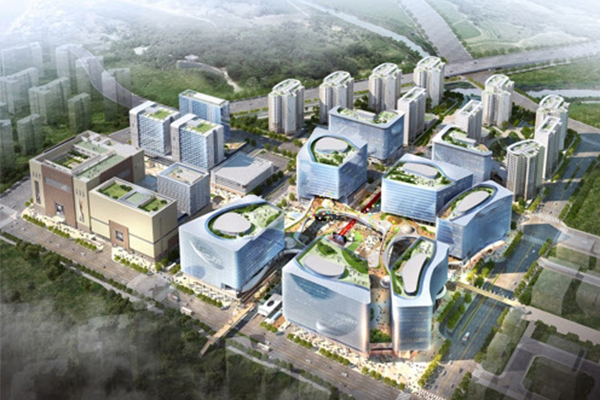 By Hong Jang-won and Kim Hyo-jin